It was an action very much in keeping with 2 B’en (the “generation of personal authority”) last Wednesday when a small group of Tyendinaga Mohawk protestors set up a blockade next to Via Rail tracks between Montreal and Toronto. Telling news reporters that “the women are in control”, they sang songs, played drums, and waved banners to draw attention to an issue that has received inadequate response from authorities – that of missing or murdered aboriginal women. As brave and important as that demonstration may have been, it, nevertheless, made for a problematic day for thousands of rail commuters in that region 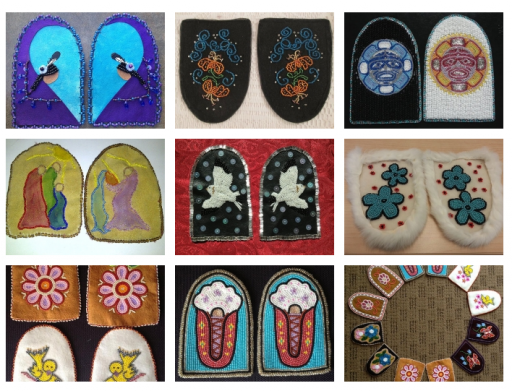 Moccasin Vamps from the “Walking With Our Sisters” exhibition

However, another group has found a very creative way to bring this issue to the attention of the public – and that is through art, through the beading of moccasin vamps. Opening yesterday in Winnipeg, the travelling exhibition called “Walking With Our Sisters” now includes over 1700 pairs of beaded moccasin vamps created and donated by over 1300 concerned individuals who are working to draw attention to the fact that there has been inadequate inquiry given to the murder or disappearance of over 800 native women and girls in Canada over the past 20 years.

These vamps (or “uppers”) are unfinished moccasins representing the unfinished lives of the lost women. More information on this important project can be found here.