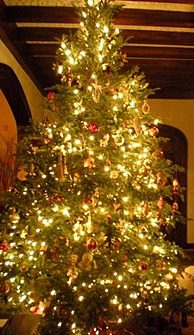 After a rough (or downright devastating) 2017 for many, the Ok trecena – generally aligned with Love, Loyalty, Warmth, and Guidance – will carry us from Christmas on through the first few days of the New Year.

Traditionally the first day of this energy period was celebrated as an ancient Feast Day of Renewal, oriented around the idea of guidance, justice, and the restoration of life. Thought of as being under the influence of Xipe Tótec, the Lord of Renewal, and Quetzalcóatl, Lord of Life, this is a time when a new sense of direction in conjunction with the energies of renewal come into play. This was symbolized specifically by Xipe Tótec who was generally depicted wearing a flayed skin, symbolic of the “sloughing off” of the old and the bursting forth of the new.

One of the key symbols associated with this time frame is a dog holding a torch, bringing light into the darkness and showing the way. Given that winter has officially arrived in northern climes and many, many people are seeking light and warmth in the context of great darkness, this is a welcoming force. Indeed, this was seen, traditionally, as a symbol of comfort and direction, so there is often a great deal of warmth – and even fire – associated with this energy. 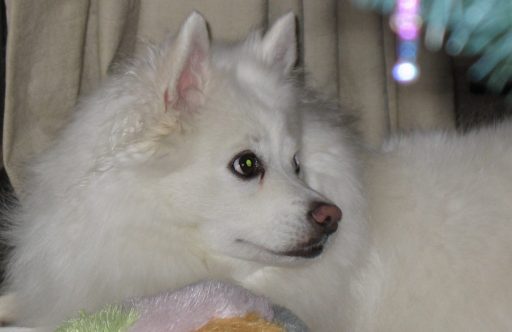 Our magical little Eskie who always knows how to bring light and warmth to the world. Ok generally translates as “Dog”. Photo by Marguerite Paquin

Two cycles ago huge numbers of people were working with this energy to try to find some light in the context of the darkness and viciousness of the US presidential race. It was at this time that Hillary Clinton made history by becoming the first female to be officially nominated as a presidential candidate, so there seemed to be a lot of momentum for overcoming the Trump scare in the previous trecena. As everyone is painfully aware, four months later there was a huge upset in that regard, but at the time of her nomination there was a strong sense of hope and direction.

One cycle ago (in April of this year) this Ok trecena brought a huge alert from British, European and even Australian spy agencies to their counterparts in Washington about contacts between members of Trump’s campaign team and Russian intelligence operatives, concerning “specific concrete and corroborative evidence of collusion” that they had uncovered. Evidence that incriminated Trump campaign manager Paul Manafort (whose indictment was brought forth two months ago) also began to surface at that time.

In the past it has often seemed that some great sense of darkness or impending change has preceded this trecena, with some sense of hope coming through at this time.

In the past this trecena coincided with the opening of the first international Olympics of the modern era, in Athens. In 1976 this trecena saw the roll-out of the space shuttle Enterprise, the first test shuttle of the space shuttle series, which significantly opened the door to new explorations in space. In 2000 this trecena prompted Pope John Paul II to ask forgiveness for the sins of Catholics throughout the ages. In a large public Mass of Pardon he proclaimed that in the past “Christians … have violated the rights of ethnic groups and peoples, and shown contempt for their cultures and religious traditions…”, a monumental declaration. Indeed, in terms of speeches, one of the most memorable in the U.S. came during this trecena in 1961 at the time of John F. Kennedy’s inauguration as president, when he delivered his famous “Ask not what your country can do …..” address.

And we can never forget the monumental “miracle of deliverance” that unfolded in May of 1940, from the fifth to the thirteenth day within this time frame. During that nine day period over 800 boats of all shapes and sizes embarked on Operation Dynamo, the extraordinary rescue of nearly 340,000 allied soldiers from the beaches of Dunkirk, France when they were trapped by the German army. It was a seemingly impossible situation that was turned around by the unselfish involvement of ordinary citizens who leapt into the breach to save the lives of all those men who were cornered in a hellish situation. 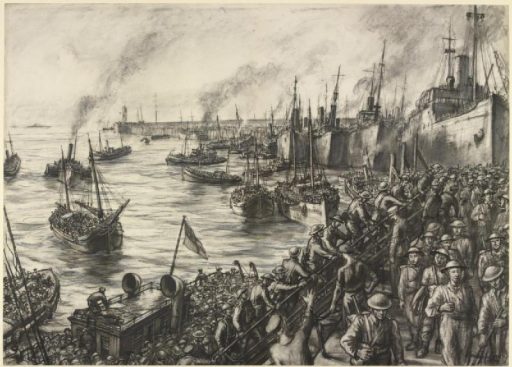 Artwork by a member of the armed forces showing boats carrying troops rescued from Dunkirk, as the boats pulled into Dover. This extraordinary rescue took place during the Ok trecena in 1940. [Public domain], via Wikimedia Commons

And now, in another place, another hellish situation has developed, this time in the U.S., with the passage of the sweeping GOP tax bill last week, a bill that provides the wealthiest people in the nation with 83% of the tax benefits and is projected to add $1.46 trillion to the US debt over a decade – a bill that will increase taxes and eliminate health care for millions of people. In addition, this is a bill that has the potential to devastate Puerto Rico’s economy and eliminate thousands of jobs just at a time when Puerto Rico is desperately trying to recover from a devastating hurricane. The bill is so horrendous that it even treats Puerto Rico (which is a part of the U.S.) as a foreign country, to be taxed accordingly. This is a bill that was shoved through in six weeks, with no hearings, with no Democratic support, with no expert testimony, and with no advance planning, a bill that is sure to cause enormous economic chaos. This bill, in addition to Republican attacks on organizations such as the FBI and the Environmental Protection Agency (which has been decimated over the past few months), has left millions of people reeling.

What is needed, it seems, is a some kind of mass consolidated effort to counter the despicable actions that are currently tearing the US apart and separating it from the rest of the world. And there has already been quite a bit of “practice” in this regard, as many, many enormous protest demonstrations have already taken place, as seen when this trecena was in place last April when some 200 cities and communities across the U.S. and around the world took part in the “Chicken Trump” Tax March. With so much currently at stake, with so many lives being turned upside down by Republican actions in the US, it is not inconceivable that this might be the time when a critical mass of people finally reach the point where they will “not take it anymore”, at which point torches will be lit, visionary leaders will appear, and millions will step forward to rescue their country from the grips of those that are pulling out all stops to destroy it. As Congressman Adam Schiff mentioned just a few days ago this is a “precarious moment for US democracy”. What happens during this time frame could be critical.

This would be a great time – as when in 1940 all seemed lost – to Remember Dunkirk!!  At that time all seemed impossible at the beginning of this trecena, with thousands needing to be rescued, but everyone who had a boat got involved and by the end of the trecena thousands of lives had been saved! Currently we can easily see that there are millions needing to be rescued, and it will take both bravery and ingenuity on the part of tens of millions to dissipate the darkness. As the light and warmth of the Ok trecena work their way through this time frame these are the energies that will come into play, beginning with  the traditional Mayan Feast Day of Renewal:

1 Ok (Dec. 25th) – the “initiation of love, warmth, guidance” – an energy that can be seen as having an ability to shine light on things previously unseen; an ancient Maya Feast Day of Renewal, correlating at this time with Christmas Day. 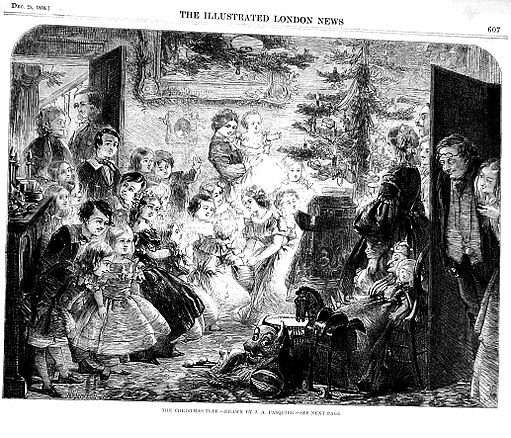 
2 Chuwen (Dec. 26th) – a dynamic type of energy traditionally aligned with creativity, and often involving some kind of “intense heat”, correlating at this time with Boxing Day in Canada. As this is a solar force within a fire-oriented time frame, this energy can trigger intense action.

3 Eb’ (Dec. 27th) – the activation of “animated vitality”, a pathfinding/stream-of-consciousness type of force

4 B’en (Dec. 28th) – a “defining” energy associated with personal authority; a highly consequential force in world history, as this was the energy in place at the time of the assassination of President John F. Kennedy in 1963.  In 2016 this was the energy in place when Hillary Clinton made history by becoming the first female to be officially nominated as a presidential candidate.

6 Men (Dec. 30th) – a “stabilizing” type of energy associated with the high vision of the eagle. Two cycles ago this was the energy in place when Hillary Clinton delivered her acceptance speech as the Democratic nominee for President at the DNC, with every expectation that she would actually be elected president.

7 Kib’ (Dec. 31st) – a self-generating type of energy, often associated with generating the kind of thought that can lead towards the restoration of  order. One cycle since the “Chicken Trump” Tax March Day across the U.S. and in other cities around the world. 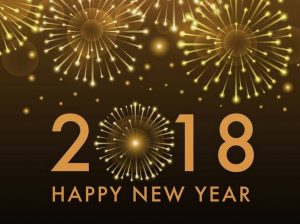 January 1st, 2018 coincides with Eight Kab’an (the “resurrection” of movement)

8 Kab’an (Jan. 1st) – a “resurrection” type of energy associated with “evolutionary” movement, coinciding at this time with New Year’s Day and a Supermoon, a Wolf Moon that is bigger and brighter than normal. In 1961 this was the energy in place at the time of the inauguration of President John F. Kennedy.

9 Etz’nab’ (Jan. 2nd) – representative of “outwardly-projecting” flint, a “spark-oriented” (and even knife-edged) type of energy that can be quite dramatic and consequential

10 Kawak (Jan. 3rd) – “foundational storm” – an energy associated with intense catalyzation that can manifest in major energy pushes or strong weather systems. One cycle since the publication of Alan Lichtman’s “The Case for Impeachment” which illustrates the multiple layers of issues which can provide a foundation for Trump’s impeachment. Maya birth energy of songwriter Leonard Cohen, who was such an inspiration to many. Quadrantids Meteor Shower (bridging to Jan. 4th) 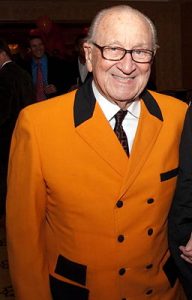 Dal Richards in 2009. Dal was a Canadian big band leader who was well known for playing New Year’s Eve concerts. He would have turned 100 during this Ok trecena, on Jan. 5th, 2018. Photo by Urban Mixer (Raj Taneja) (Orange Helmet Awards Dinner) [CC BY-SA 2.0], via Wikimedia Commons

11 Ajaw (Jan. 4th)  – an “inspirational sun” or “inspirational enlightenment” Burner Day. In 2011 this was the energy in place when the price of gold rose to an unprecedented $1743/oz. on the same day as the sun emitted an Earth-directed X6.9 solar flare.

12 Imix (Jan. 5th) – a “gathering together” type of force oriented around new beginnings (often “cosmic”). This would have been Dal Richards’ 100th birthday. The legendary “King of Swing”, he led his band in 79 consecutive New Year’s Eve concerts, until his death at 11:41 p.m. on Dec. 31, 2015. Opening of the extraordinary Harbin International Ice and Snow Sculpture Festival.

13 Ik’ (Jan. 6th) – transformational wind, breath, and spirit, this time coinciding with a conjunction of Jupiter and Mars, and the Christian celebration of Epiphany. At this time this celebration is perfectly aligned with 13 Ik’ as the concept of epiphany pertains to the manifestation of a supernatural or divine reality, or a sudden revelation, as in the manifestation of Christ to the Magi.

Maya calendar energy that was in place during the final day of the enormous Dunkirk rescue operation during World War II.