At times it seemed like it might be fisticuffs or “pistols at dawn” as lawmakers in the upper chambers of both the Canadian and U.S. governments grappled with scandals and vastly opposing ideologies during the past two trecenas. While some “restoration of order” took place in the U.S. during the Kib’ trecena, it appears that a major “cleansing” is needed in Canada, in conjunction with the messy Senate debacle. Perhaps the watery cleansing energy of the Muluk trecena will help in this regard. With its emphasis on generative vitality, this trecena has been known for “washing out” stagnant energy and for pushing forward new possibilities, as seen on the second day of this trecena in 1936 when King Edward VIII abdicated his throne “to be with the woman he loved”, with this abdication requiring Queen Elizabeth’s father to step up and assume the crown as King George VI. That very same influence was in place in 1947 when India declared its independence from Britain.

Another form of abdication occurred during the last appearance of this energy when Pope Benedict suddenly announced his resignation, and preparations began for the election of his successor.

In addition to a “cleansing” sort of influence, there is often a strong revitalization aspect to this energy, as seen two cycles ago at the time of Queen Elizabeth’s Diamond Jubilee in the U.K. The “jewelled” turkey symbol of abundance that serves as the patron of this trecena seemed to be sparkle brightly at that time, particularly during the Grand Regatta on the River Thames.

Gloriana at Queen Elizabeth’s Jubilee Regata on the River Thames, 2012

All of this may add an extra infusion of energy to the various events coming up in the middle of the trecena, beginning with Hallowe’en, which will coincide at this time with 6 Ix, the energy exemplified by the awesome, mysterious Jaguar – supreme master of magic and the night. This will be followed shortly thereafter with several events designed to uplift spirits (quite literally) and bring in candle power. This includes All Saints’ Day on Nov. 1st, a commemoration of all saints collectively, under the uplifting influence of “Men”, the eagle. This is the first day of Mexico’s Day of the Dead (known to the Maya as Hanal Pixán – or “feast for the souls”), which will be followed by All Souls’ Day in many countries. 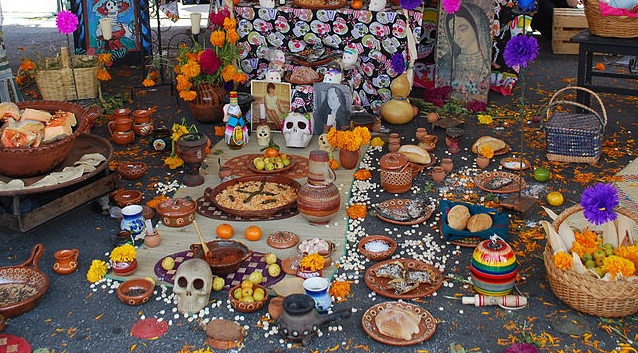 Day of the Dead altar in Mexico City

Celebrations in Mexico aligned with Dia de los Muertos can be highly elaborate, as homes and altars are richly decorated with food, chocolate, flowers, and other forms of adornment to welcome the return of deceased loved ones. The culmination of these festivities (on 8 Kib’, Nov. 2nd) is on the same day as the Balinese celebration of Kunigan, the day of departure for the ancestral spirits who have been visiting during Galungan (see my Oct. 22nd post). As will be the case during the candle-lit ceremonies on 8 Kib’, candles and lanterns will also be out in force the following day (9 Kab’an) to commemorate Diwali, India’s great Festival of Light, which is now celebrated in many different countries. 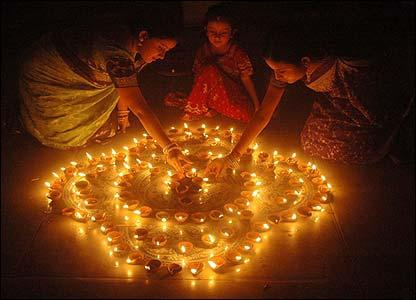 As that day will also coincide with a New Moon, a Solar Eclipse, the end of Daylight Savings Time, all that extra light may well be needed! The following day will be 10 Etz’nab’, often a sparkling attention-grabber, as happened on the last occasion of this energy when some 80,000 people gathered in St. Peter’s Square to hear Pope Benedict deliver the first angelus since announcing his resignation, and one of his last.

So over this next 13 days we may see a considerable amount of generative shape-shifting as the watery forces of Muluk sweep through this highly “spirit-oriented” time frame. These are the energies that will come into play:

1 Muluk (Oct. 26th) – “the initiation of water”, a kind of “double water” day involving the Moon Goddess (associated with Number One) in conjunction with the refreshing, shape-shifting energy of water; an important 52-day shift-point within the 260-day cycle

3 Chuwen (Oct. 28th) – the “activation” of creativity; an important “time-weaving” type of energy that can often signal significant shifts

4 Eb’ (Oct. 29th) – the “defining of animating vitality”; an uplifting, refreshing type of energy that often brings a sense of the opening up of new possibilities

7 Men (Nov. 1st) – a “self-generating” type of energy associated with the Eagle’s “higher vision”, this time in conjunction with All Saints’ Day and the beginning of the Day of the Dead festivities in Mexico

8 Kib’ (Nov. 2nd) – the “resurrection” of the transmutation oriented force that can lead towards the restoration of order; this time in conjunction with All Souls’ Day, the Day of the Dead in Mexico, and Kunigan in Bali

9 Kab’an (Nov. 3rd) – representative of “outwardly-projecting” longevity in connection with the earth and evolutionary movement; this time in conjunction with a New Moon, a Solar Eclipse, the end of Daylight Savings Time, and Diwali

10 Etz’nab’(Nov. 4th) – foundational “flint”; a sparkling, “knife-edged” type of energy that can either dazzle or divide and separate (as when Iceland’s Eyjafjallajokull volcano erupted under this influence in 2010)

11 Kawak (Nov. 5th) – inspirational “storm of compassion”, as seen when the Occupy Wall Street campaign began under this influence in Sept. 2011

12 Ajaw (Nov. 6th) – a “gathering together” force aligned with the full sun; precisely 8 Tzolk’in cycles since the major solar eruption that created vivid aurora borealis displays in 2008; 106 cycles since the great Tunguska asteroid event in Siberia in 1908

13 Imix (Nov. 7th) – “transformational birth” – a highly intense energy, as exhibited by the 7.1 earthquake that rattled Chile and triggered a tsunami warning under this influence in 2011; this time in conjunction with the final day of the Maya month known as Sak, which may add to the intensity