When looking at events through the lens of the Maya Calendar it is amazing what manifests even when one has a general sense of the nature of the forthcoming energies. The high level shake-ups during this past “transformation-oriented” trecena was a case in point. Hardly a day went by without the announcement of yet another huge political shift.

Now, as we proceed through this current trecena, we are entering an energy frame where, once again, a number of adjustments are going to have to be made in the effort to restore harmony. This is the Manik’ trecena, symbolized by a Deer or Stag, a powerful but gentle and adaptable creature. The overall theme for this 13-day time frame is Sacrifice and Reconcilation, which suggests that a considerable amount of “give-and-take” may be required in order to regain some sense of equilibrium. 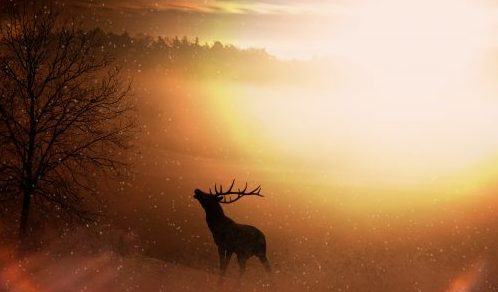 Deer in sunset. Public Domain, ABSFreePic. In Maya cosmology the deer is often seen as a “carrier” for the sun on Earth. With this trecena in place during these hot August days this is certainly an apt metaphor.

In many ways this echoes the situation during the last appearance of this trecena, last November, when people were frantically attempting to sort out how to move forward after the U.S. election, with hundreds of thousands still engaged in protest demonstrations and many demanding vote recounts. And in the White House, of course, there was the challenge of attempting to work out how to transition to the new presidency. Given all the high level firings and resignations, and all the related turmoil over the past six months, this challenge has clearly proven to be “too much” for many. For others it appears that ignoring Trump seems (at least at the moment) the best way to move forward.

As seen in the past, this is a trecena that can put a heavy emphasis on negotiation, with the 1962 Cuban missile crisis being a prime example. At that time Soviet submarines were in the mid-Atlantic en route to Cuba, fighting their way through a huge storm in the Sargasso Sea (mid-Atlantic), and tens of thousands of armed soldiers were already in Cuba. The final day of this trecena brought the highest level of warning regarding the nuclear threat from the Soviets at that time, and has been seen as a “game-changing” moment for President John F. Kennedy. Fortunately for us all that crisis was averted. In 1989  this same energy saw the dismantling of the Berlin Wall, and in 1991 it brought the end of the Soviet Union as all official Soviet operations ceased after the Soviet Union was declared dissolved. Given the current situation in North Korea, with its testing of intercontinental ballistic missiles and its related threats, any energies aligned with negotiation would be useful in helping to tone down the rhetoric and work towards some sort of resolution.

Four Ok, a fiery “burner” day, brought the explosion at the Fukushima nuclear power plant in Japan (after the tsunami). This one might seem particularly daunting as currently throughout British Columbia and elsewhere (such as California and many parts of Europe) wildfires are raging ferociously out-of-control, forcing the evacuation of thousands of people and fomenting enormous havoc in the lives of many. 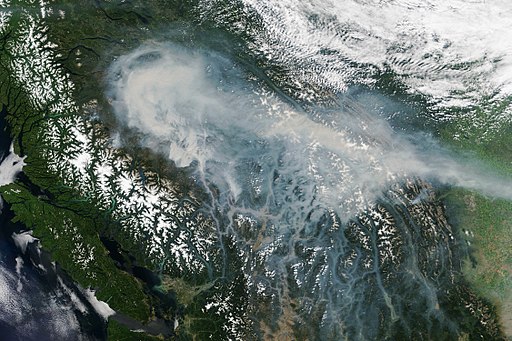 By mid-July more than 50,000 people had been required to evacuate from wildfires in B.C.’s interior. By early August the smoke was strongly affecting air quality even in Vancouver.  Photo Source: NASA Earth Observatory.   reublic Domain via Wikimedia Commons.

Even though the fires in this province are in the interior, the smoke is so thick that it is even affecting air quality in Vancouver. At this time Four Ok coincides with the Full Moon and a partial lunar eclipse, the first of two important eclipses this month. Under these circumstances, with the wildfire situation changing day by day, a great deal of “Sacrifice and Reconcilation” may  be required in order to regain stability.

The eighth day (8 Ix) was celebrated traditionally by the Maya as “Santo Mundo”, a very special day for honouring Mother Earth. As it happens at this time, this day coincides with the start of Elvis Week in Memphis, to mark the 40th anniversary of the passing of one of the greatest rock icons of all time.

The final day (13 Kawak) of this trecena can often be quite intense, as it was in 1964 when it brought forth the 9.2 magnitude earthquake that struck Alaska. At the present time this powerful force is sure to trigger some deep emotions as thousands commemorate the 40th anniversary of the death of their beloved “king”, Elvis Presley. A candlelight vigil at Graceland will begin the evening before and bring in this energy in the wee small hours of the morning. 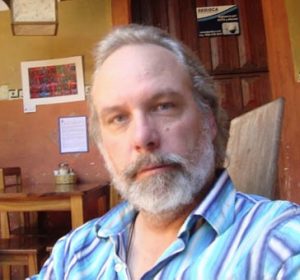 And on the subject of commemoration and vigils of remembrance, my thoughts and prayers will be added to those of the many who will attend a “Celebration of Life” event on the tenth day of this time frame in honour of the life and contributions of my friend and colleague John Major Jenkins, who lost his life to cancer not long before his Maya birthday, which he was due to celebrate during the last trecena. Tragically he did not quite make it to that milestone, instead making his transition just before the completion of the last 260 day cycle. As John’s contributions to this field were enormous and deserve to be more widely recognized I will comment further on this topic at later dates. In the meantime many are feeling the pain of his loss at the young age of 53. From a personal perspective, the process of “reconciling” his loss will be difficult.

As always, it is never possible to predict the exact nature of the “Sacrifice and Reconcilation” that may unfold during these 13 days. Often it can be a time of “testing” that can require people to deal with important issues, working towards the goal of regaining some sense of equilibrium. As this trecena is coming into play just as a grand jury is being assembled in Washington D.C. to review evidence being brought forward by Robert Mueller’s investigative team relating to Russia’s meddling in the election and the Trump-Russia connections, it will be interesting to see if this will eventually lead to criminal indictments. As this plays out, these are the energies that will come into play:

1 Manik’ (Aug. 4th) – the “initiation of reciprocity”, symbolized by the Moon Goddess working with the Deer/Stag, the “carrier” of the sun on Earth. As of today Christy Clark steps down from her leadership of the B.C. Liberal Party. 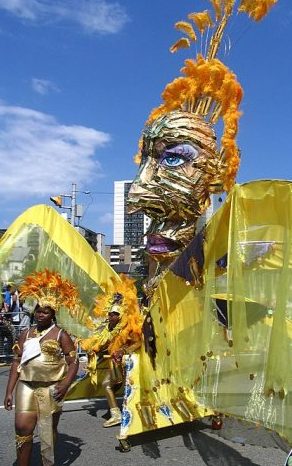 2 Lamat (Aug. 5th) – a “dynamic heralding” (or leadership) type of energy, as was in place at the birth of Elvis Aaron Presley in 1935. As most are aware, Elvis (“the King”) is seen as “one of the most significant cultural icons of the 20th century”. As it happens this trecena encompasses a good portion of Elvis Week, marking the 40th anniversary of his death in 1977.  At this time this energy also coincides with Toronto’s flamboyant Caribana parade.

3 Muluk (Aug. 6th) – the “activation of water”, often a powerful “shape-shifting” type of force, coinciding at this time with  Vancouver’s Pride Parade, and with the last day of the Star Trek convention in Las Vegas. This was the Maya energy in place at the time of the start of the Cuban missile crisis (in late October, 1962), at the time of the death of Princess Diana (20 years ago as of the end of this month), and at the time of other momentous events, as noted above.

4 Ok (Aug. 7th) – a “defining” Burner Day representative of fire (or heart-fire), an energy that can often stir the emotions as this is a “double-fire” type of force, coinciding at this time with the Sturgeon Full Moon (aka the Corn Moon or Grain Moon), a Partial Lunar Eclipse, Heritage Day in Alberta, B.C. Day, Manitoba’s official Terry Fox Day, and the last day of Toronto’s Caribana.

5 Chuwen (Aug. 8th) a “precision” oriented energy in combination with play or even mischief; a “timeweaver” type of energy that can bring about change through innovation.

6 Eb’ (Aug. 9th) – generally a “stabilizing” type of energy aligned with “restorative vitality” this energy coincides at this time with International Day of the World’s Indigenous Peoples

7 B’en (Aug. 10th) – a “self generating personal authority” type of energy; the energy in place in April of 1865 when General Robert E. Lee surrendered the Confederate army to General Grant, precipitating the conclusion of the U.S. civil war. Currently this energy coincides with World Lion Day and the opening of Michael Moore’s “The Terms of my Surrender” on Broadway.

I refuse to live in a country where Donald Trump is president, and I’m not leaving. So something’s got to change.   Michael Moore 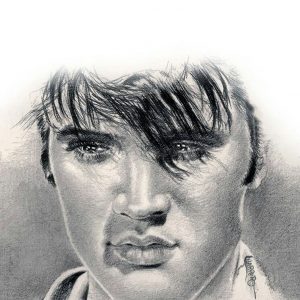 Portrait of Elvis © Betty Harper, the artist who has created over 20,000 images of Elvis

8 Ix (Aug. 11)  “Resurrecting Jaguar” – this is Santo Mundo, a special Maya day devoted to the Celebration of the Earth and its sacred mysteries, coinciding at this time with the start of Elvis Week in Memphis, to mark the 40th anniversary of his passing.

9 Men (Aug. 12th) – the “outward projection” of vision (as in the high-flying vision of the Eagle), coordinating at this time with the peak of the Perseids Meteor Shower, World Elephant Day, the Red Dress Run in New Orleans, and the UN’s International Youth Day, with its theme this year being “Youth Building Peace”. Maya calendar (Tzolk’in) anniversary (28 cycles ago) of the funeral of Princess Diana, and Tzolk’in anniversary of the funeral, in 1952, of King George VI, Queen Elizabeth’s father.

10 Kib’ (Aug. 13th) – a “foundational restoration” type of energy which can fluctuate between the setting up of important foundations (as in the setting up of the nuclear non-proliferation treaty in 1968) to the kind of massive “clean up” that was required in China in 2008 after the Szechuan earthquake. 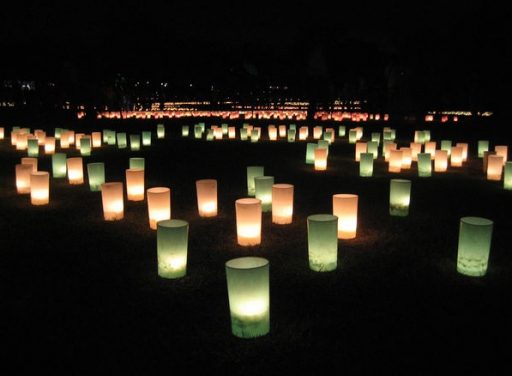 Obon Festival in Japan, when the departure of ancestral spirits is marked by lanterns and fire. Photo Credit: http://www.japan-talk.com/jt/new/obon

At this time this energy coincides with the start of the Obon (Festival of Souls) in Japan  and the Celebration of Life for Mayanist John Major Jenkins in his home town of Winslow, Colorado.

11 Kab’an (Aug. 14th) –the energy of “change” combined with the force of evolutionary movement, at the time of the 18th crossing of Saturn’s rings by NASA’s Cassini spacecraft; the first of the final five dips into Saturn’s atmosphere before completing its mission next month.

12 Etz’nab’ (Aug. 15th) – a robust “knife-edge” type of force that can bring forth powerful separation (or “sacrifice-related”) events, as in the assassination of President Abraham Lincoln in 1865 and the naval quarantine of Cuba in 1962. At this time this energy coincides with the 70th anniversary of India’s independence, and the 100th anniversary of the start of the Battle of Hill 70 in France. 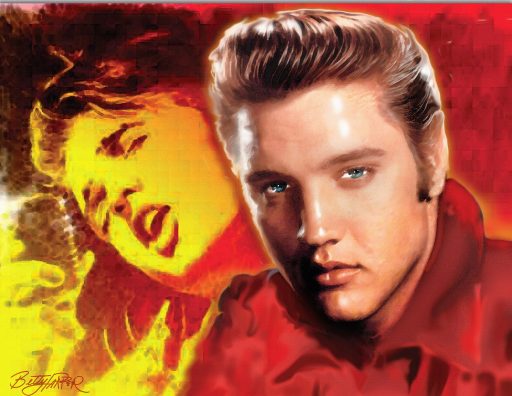 “Any Way You Want Me” © Betty Harper, the artist who has created over 20,000 images of Elvis

On this evening a candlelight vigil will begin at Graceland, going through into the next morning, to mark the anniversary of the death of Elvis.

13 Kawak (Aug. 16th) – “transformational storm”, a Maya calendar anniversary of the energy in place when Andrew Johnson took office as the US president in 1865. (He was impeached three years later – the first to be impeached). At this time this energy marks the 40th anniversary of the death of Elvis.