Shutdowns, stoppages, outages – the “darkness” of the last trecena played itself through in many different ways, from the shutdown of the U.S. government, to the horrific typhoon in China that affected four million people, to the blizzards and storms in the U.S. Midwest and Northeast that triggered widespread blackouts, to the nationwide shutdown of cell phone service in Canada, it was one thing after another. Within U.S. Congressional chambers issues associated with morality and ethics became so acute that the Senate Chaplin felt it necessary, during his morning invocations, to scold lawmakers for their “shameful” behaviour, and to include prayers for members of Congress to be delivered from transgressions, smugness, selfishness, “stubborn pride”, and “from the hypocrisy of attempting to sound reasonable while being unreasonable.” As much as divine intervention may be needed to get that government functioning again, the Kib’ trecena with its orientation towards transmutation and the restoration of order may also be helpful.

On the last appearance of this trecena the “initiating” force of One Kib’ brought thousands of people out to participate in a March on Washington in support of stricter gun control, while thousands of others participated in similar rallies in other cities across the U.S. Precisely five Tzolk’in cycles ago, on the One Kib’ that coincided with March 23, 2010, President Obama signed The Patient Protection and Affordable Care Act (PPACA) into law – and now, as this energy returns, this law has become a significant part of the fiscal impasse debate.

It is intriguing to see that, at this time, the beginning of this trecena coincides with the UN’s International Day for Disaster Reduction. This fits perfectly with this trecena’s energy as this is a time frame during which a reassessment or reshuffling of priorities can sometimes take place. This can often involve “shaking things up” prior to the creation of a new state of balance. There is often an emphasis on both duality and transformation, sometimes involving paired events or paired ideas struggling to maintain equilibrium, or even the “revisiting” of an older idea to gain a new perspective.

This type of pairing could be seen quite vividly in the context of the infamous “9/11” event of 2001 when the twin towers of the World Trade Center were destroyed when hit by two planes that exploded upon impact. That event occurred on 6 Imix, an “everywhere” type of energy associated with both chaos and birth. As everyone is aware, this was a world-shifting event, and massive transmutations in national and international security have come into being as a result of the firey forces that were in motion on that day.

Incredibly, a very similar situation unfolded on the last appearance of 6 Imix, at the end of January of this year, precisely 16 Tzolk’in cycles after 9/11, when a blast collapsed the lower floors of the headquarters of Petroleos Mexicanos in Mexico City, crushing 33 people beneath tons of rubble. This building was an iconic 52-storey tower similar in style to New York’s former World Trade Center, and was originally designed as a pair of 26-storey buildings. (Note: 26 and 52 are key Maya Calendar numbers.) In an eerie replay of the scene from 2001, people covered with dust rushed away from the buildings, as white smoke billowed out and glass fell around the earthquake-like situation at ground zero. At the time of the blast the buildings had already been partially evacuated due to electrical problems. The following day (7 Ik’) hundreds of rescue workers were involved in searching for survivors from the blast. Little did they realize that this day was a Tzolk’in anniversary of the first bombing of the World Trade Center (in 1993), at which time six people were killed and 1000 injured.

These kinds of events are suggestive of the “fire in the earth” kinds of forces associated with the patron energies of this period, energies that hold the potential of fomenting havoc for the purpose of transmutation, often as part of a push towards the birthing of a new type of order. It was a similar kind of scenario in San Francisco in 1906, at the time of the great earthquake and fire, which was unleashed in the early morning hours of One Kib’. As the San Andreas fault ripped open for a distance of almost 300 miles, several thousand people lost their lives and much of San Francisco was reduced to rubble. 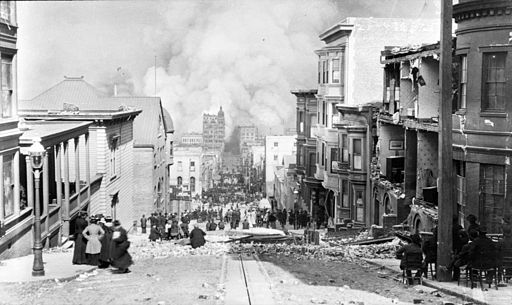 Sacramento Street in San Francisco on April 18, 1906 (Maya date One Kib’) just after the earthquake, on the first day of the fire, by local photographer Arnold Genthe

This devastating event drew attention in a dramatic fashion to issues associated with the building of highly flammable structures on earthquake fault lines, without adequate fire protection or water supplies. As the struggle to provide and maintain adequate structural and support systems for cities located in such zones continues today this event continues to serve as a reminder of what can happen when the earth starts to rumble.

But what might be remembered is that this particular time frame, which has propagated its share of world-shaping events, also holds the potential to engender glimmers of light, as old patterns go through the process of transmutation and new imperatives come into view. With its emphasis on such things as illumination, ingenuity, vigilance, forgiveness, and even practicality, this time frame has brought forth, for example, the Supreme Court order to desegregate U.S. public schools (in 1954); the meeting of 900 bands of First Nations at the Assembly of First Nations and the National Congress of American Indians to build an alliance between indigenous peoples of Canada, the U.S., Mexico, and South America, in 1999; the world’s largest peace rally (involving millions of anti-war protestors), in 2003; and the signing of a U.S./Russian agreement to reduce nuclear arsenals, in 2009. Hopefully it will also bring forward a workable solution to the situation in Washington.

During this timeframe these are the energies that will come into play:

1 Kib’ (Oct. 13th) – the “initiation” of the transmutation force that leads towards the restoration of order, in conjunction with the UN’s International Day for Disaster Reduction; Tzolk’in anniversary of the 1906 San Francisco earthquake

2 Kab’an (Oct. 14th) – a “dynamic” type of energy related to the earth, or “earth movement”; the energy in place when fires raged through San Francisco after the quake. This time this energy accompanies Thanksgiving Day in Canada and Columbus Day in the US.

3 Etz’nab’ (Oct. 15th) – the “activation” of a sparkling, “knife-edged” type of energy that can either dazzle, or divide and separate; on the last appearance of this energy significant Idle No More demonstrations were held in at least 30 Canadian cities

4 Kawak (Oct. 16th) – a “defining” type of energy aligned with “storm”, representative of the sun working together with intense rain, which can manifest in very “attention-grabbing” ways, as in the “storm of the century” in Ontario in 2004, the “Super Tuesday” tornado outbreak in the U.S. in early Feb. of 2008, and both Hurricane Irene (eastern seaboard) and Super Typhoon Nanmadol (Taiwan) in August of 2011; on this current appearance this energy coincides with World Food Day

5 Ajaw (Oct. 17th) – the “blessing of enlightenment”, precisely 300 days since Dec. 21; a Tzolk’in anniversary of the energy that was in place when women were officially recognized as “persons” under British law, in 1929. This time this energy coincides with the UN’s International Day for the Eradication of Poverty – ironically on the same day as the U.S. Treasury could supposedly run out of money to pay the nation’s bills, unless lawmakers agree to raise the government’s statutory borrowing limit. This is also the day scheduled for The Great ShakeOut earthquake drill, scheduled in many countries to be held at 10:17 am; see http://www.shakeout.org/faq/

6 Imix (Oct. 18th) – an “everywhere” type of energy associated with “birth”, which can often bring chaos as some new order of being is manifested (as in the devastating “9/11” event in N.Y. in 2001); at this time this coincides with a Full Moon and a Penumbral Lunar eclipse, and a WE Day celebration in Vancouver in conjunction with the “Free the Children” organization [Speakers will include former UN Secretary General Kofi Annan and the Honorable Roméo A. Dallaire, Co-Director of the Will to Intervene (W2I) Project: Leadership and Action to Prevent Mass Atrocities]

7 Ik’ (Oct. 19th ) – “self-generating” wind/breath/spirit, as seen in 2003 when the world’s largest peace rally, involving millions of people, took place under this influence

8 Ak’b’al (Oct. 20th) – a “resurrection” type of energy associated the “temple” or “house”, and deep esoteric mysteries; the energy under which the first National Women’s Day was celebrated in the U.S. (in 1909)

9 K’an (Oct. 21st) – representative of “outwardly-projecting” longevity in association with germination, as when the Hubble Space Telescope was deployed in 1990; a strong association with opulence as seen last year when over 2500 troops took part in Queen Elizabeth’s Diamond Jubilee celebrations at Windsor Castle, and 78 aircraft staged a major fly-pass

11 Kimi (Oct. 23rd) – “inspirational” new foundations; in the U.K. this is the day when HRH baby George will be christened; in Bali this is the start of the Galungan festival, the day when the ancestors return for a 10 day visit (see also the Oct. 22nd post)

12 Manik’ (Oct. 24th) – a “gathering together” type of energy associated with reciprocity; this time in conjunction with United Nations Day and World Development Information Day