“The strongest storm on the planet so far this year” – that is the description being given to Super Typhoon Haiyan (aka Yolanda), the gargantuan Category 5 hurricane that started making landfall in the Philippines early today. Expected to affect millions of people, this storm is a monster that is threatening a region that was hit by a 7.1 earthquake just three weeks ago. With sustained winds of 314 km/hr. this wind system is arriving just as the intense energies of 13 Imix are giving way to the Ik’ (Wind) trecena . . .  and strong winds are often the order of the day during this energy sequence.

However, this also signals a shift into a realm of high magic, as this forthcoming “Wind, Breath, Spirit” trecena is aligned with the Mesoamerican deity known as Ehécatl, the wind/ breath/spirit form of Quetzalcoatl. This is an energy associated not only with wind, but also with the breath of life, with communication, inspiration, and many things of a spiritual nature. Two cycles ago the beginning of this trecena coincided with the rare transit of Venus across the face of the sun; in 1994 it coincided with the birth of the first “true” female white buffalo calf since 1933 – a day of high significance for Native Americans, as this was seen as representative of the coming of White Buffalo Calf Woman, the divine entity who originally brought the sacred pipe to the Lakota nation 19 generations ago and taught the people about the sacredness of life.

In 2005 Joseph Ratzinger was inaugurated as Pope Benedict XVI during an open air mass at St. Peter’s on One Ik’, the first day of this trecena. Then after journeying through the energies of the Tzolk’in precisely eleven times (2600 + 260 days) he began the final week of his papacy on One Ik’ (Feb. 21st of this year) before retiring into seclusion.

On its last appearance this trecena coincided with the 57th session of the Commission on the Status of Women that convened in New York, which included a special meditation inside the United Nations headquarters. On the same day as that meditation 142 cardinals sequestered themselves in Rome for the purpose of electing a new pope.

As this trecena gets underway this time people are preparing for the important commemoration ceremonies that will take place on Remembrance Day/Veteran’s Day on Nov. 11th. As it happens, one of the poems that is most often read on those occasions of remembrance is the one titled In Flanders Fields, written by Lt. Col. John McCrae who was born on the fourth day of this trecena, in 1872. Although that birth took place at the end of November that year, his Maya birth energy (the Burner Day known as 4 Chikchan) happens to coincide with Remembrance Day this year. 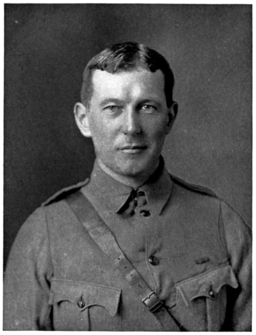 Photo of Lt. Col. John McCrae, from the frontispiece of “In Flanders Fields and other poems” (via WIkimedia)

Chikchan is a “Lifeforce” oriented energy, which is “carried” by the wind/breath/spirit energy of Ik’, and his poem highlights the unquenchable spirit of Life, even in the context of death.

The larks, still bravely singing, fly
Scarce heard amid the guns below . . .”

Indeed, the poem is so well know that it is immortalized in stone at many memorial sites. McCrae was a physician whose work was dealing with “Lifeforce”. Ironically, he died of pneumonia, unable to “catch his breath”. Had he lived another another 20 years he would likely have been appalled to learn that during the spring of 1938 (on 13 Ix, the final day of this trecena) Hilter signed a secret directive for war against Czechoslovakia, one of the earlier aggressive acts that lead to the deaths of some 60 million people in the context of WWII. 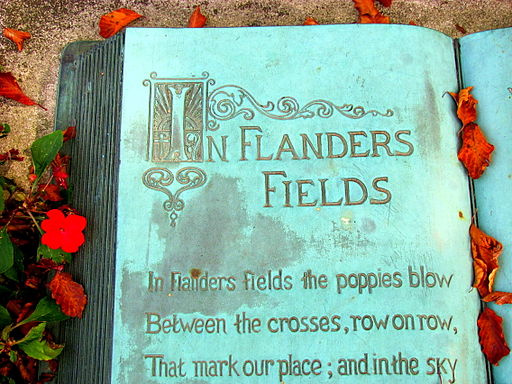 “In Flanders Fields” from the McCrae House National Historic Site of Canada. Photo by RichardBH from Hamilton, Canada (In Flanders Fields) [CC-BY-2.0 (http://creativecommons.org/licenses/by/2.0)], via Wikimedia Commons

McCrae died on a One Kawak day in January, 1918, precisely one cycle after the miraculous first appearance of the Virgin Mary to three children at Fatima, and three months after the sixth and final appearance of the Virgin to the same three children, again at Fatima, during the Ik’ trecena. This appearance, which occurred on 11 Eb’ near the end of this time frame, apparently took place in front of some 70,000 people who reportedly witnessed the “Miracle of the Sun”, at which time many apparently saw the sun go through an unusual zigzag movement; many were cured of afflictions.

Although one can never predict or guarantee the appearance of miracles, we can continue to keep a lookout for more high winds, as even the start of this trecena is packing an enormous whallop!! Both One Ik’ and Seven Lamat (in the middle of the trecena) seem to be prone to the generation of humungous “air-related” events. Indeed, many monumental storms have taken place during this trecena as a whole and the last occurrence of this energy sequence was no exception, as several treacherous blizzards (including the “Great Plains Blizzard” that started on One Ik’ this past February) were unleashed in the US at that time and other areas were inundated with torrential rains.

Tornadoes are common during this sequence, and they can strike in unexpected places, as on the last appearance of this energy when Venice, Italy was hit by a rare tornado that tore across the islands in the lagoon, uprooting trees and tearing the roofs off buildings. And if that wasn’t enough a swarm of some 30 million locusts inundated Cairo towards the end of the trecena during the last “go round” early last March. And this time this trecena is coming into place in November – so it’s definitely time to “batten down the hatches”!!

We begin the trecena with One Ik’, with the energy of the Moon Goddess (generally aligned with the waters of life as well as healing and divination) working in conjunction with the great “Wind/Breath/ Spirit” deity. These forces influence the entire thirteen day period. Chantico, the Goddess of Terrestrial Fire, serves as the patron of this time frame. When the wind becomes particularly ferocious Chantico can help to provide balance through the warmth and nourishment of her hearth fire. During this time of “high magic”, inspiration, and communication, these are the energies that will come into play:

2 Ak’b’al (Nov. 9th) – a “dynamic” type of energy associated with the temple or “house” of deep esoteric mysteries

3 K’an (Nov. 10th) – an “activation” type of energy associated with both germination and opulence; the birth energy of Queen Elizabeth II

5 Kimi (Nov. 12th) – a “precision” type of energy associated with “absolute foundations” – often a “game changer”, as happened in 2010 when the BP oil rig sunk in the Gulf of Mexico, marking the beginning of the worst crude oil spill in US history

6 Manik’ (Nov. 13th) – the energy of the six directions in conjunction with the reciprocity-oriented (but sometimes “sacrificial”) energy of the deer

7 Lamat (Nov. 14th) – “self-generating star” or beacon; a strong “heralding” type of energy, as well as a force that is often associated with strong winds (even hurricanes)

9 Ok (Nov. 16th) –an “outwardly-projecting” type of energy associated with love, loyalty, and guidance that can have long lasting influence; a “double-fire” type of energy often aligned with “hearth-fire” or even “heart-fire, as seen in the works of Mark Twain and Steven Spielberg, both born on 9 Ok days

10 Chuwen (Nov. 17th) – foundational play; a creative time-weaving type of force, at the time of the Full Moon

12 B’en (Nov. 19th) – a “grouping together” type of force aligned with personal authority, a kind of double-Quetzalcoatl type of force

13 Ix (Nov. 20th) – “transformational Jaguar” – a double transformation type of energy associated with the Jaguar, earth mysteries, and high magic; on the last appearance of this energy the Comet PANSTARRS passed close to Earth, at a distance of about 93 million miles; this time this energy coincides with Universal Children’s Day and (in Vancouver) the lighting up of St. Paul’s Hospital Christmas lights