After coming through the various “storms” highlighted in the March 15th post, we now move into the Eb’ trecena, which has been affilated traditionally with renewed vitality and fertility. In Mesoamerican mythology these energies were often recognized through feasting, dancing, and general celebration. 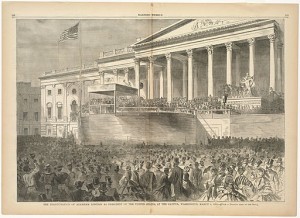 The Inauguration of Abraham Lincoln as President of the United States, March 4, 1861 (Maya Date 5 Kib’),
Wood engraving by Winslow Homer, published in Harper’s Weekly, Vol. V, Mar. 16, 1861 (from the Winslow Homer Collection of the Boston Public Library via Wikimedia Commons)

In the past the forces in play during this energy frame have brought forth many new ideas, new visions of possibilities, and new opportunites, as seen in 1789 when George Washington was unanimously elected as the first president of the United States on the first day of this Eb’ trecena; in 1861 when President Abraham Lincoln was inaugurated on the fifth day of this period; in 1979 when Margaret Thatcher became the first woman Prime Minister of the U.K. on the fourth day; and again in 2007, when Barack Obama announced his candidacy for the U.S. presidency on the eight day of this time frame.

And yes, even Russia has received blessings from this energy in the past, as happened when Czar Alexander II freed Russia’s 20,000,000 serfs in 1861 on the fourth day of this trecena (an important Burner day). This was also the trecena within which Boris Yeltsin celebrated his victory as Russia’s first popularly-elected president, in 1991, when he become the leader of an independent Russia.

In many ways this is a kind of “go with the flow” type of period that could be problematic for those who are prone to rigidity. With Eb’ being representative of the “dew of life” there is often a “refreshment” aspect to this time sequence, as new potentialities make their presence known. There is often a path-finding aspect as well, that can bring forth many new initiatives. Given that the energies of this trecena are coming into play immediately after the Crimea referendum it will be interesting to see what kinds of pathways will be opened up. Will the energies facilitate an easy shift to a new status quo? Or will there be revolutions – as happened in 1918 with the inception of the German and Hungarian Revolutions during the Eb’ trecena. Will the pathways be beneficial – or will they be problematic, as in the formation of the Nazi party in Germany in 1920 (also during this trecena). 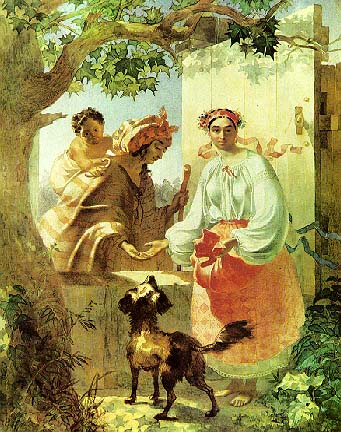 With the situation looking so grim at the moment many in the Ukraine are likely thinking of Taras Shevchenko, the poet and cultural icon who contributed significantly to the development of the modern Ukrainian language and culture. Born on a 3 Ix (Jaguar) day in 1814, Shevchenko was a former serf who became free. He also became an artist and humanist who dreamed of a better life, and a poet who wrote of the love of Ukraine and spoke of the plight of his people. He was so beloved and respected that UNESCO named 2014 the Year of Shevchenko, with the 200th anniversary of his birth celebrated in a massive rally in Kiev’s Independence Square on March 9th. His poem called Zapovit (Testament) which has been translated into over 100 languages, begins with a request to be buried in his native Ukraine:

When I die, bury me
On a grave mound
Amid the wide-wide steppe
In my beloved Ukraine

(click here for this and several other of his poems)

With the entire world wondering about the fate of Ukraine as its eastern borders are being breached and its territories infiltrated, many will be highly concerned about where their lives will be lived in the coming years (and under what authority) and where their final resting places will be. 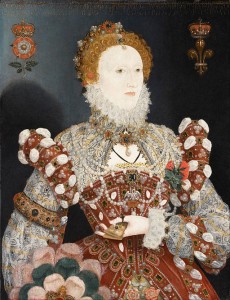 Among the leaders born during this trecena who have managed to open their worlds up to new possibilities Queen Elizabeth I was certainly one of the most remarkable. Under her authority 16th century England became a major political and economic power on the world stage.

Similarly, John F. Kennedy, born on a 4 Men “Burner” day, infused new vitality into the presidency of the United States. Fifty-two years ago (almost a Calendar Round) he was also highly instrumental in averting nuclear conflict with Russia at the time of the Cuban Missile crisis.

Also associated with that 4 Ben “Burner” energy, Comet Holmes put on a show of brilliance in 2007 when it unexpectedly increased in magnitude by a factor of about half a million in the largest known outburst at that time. 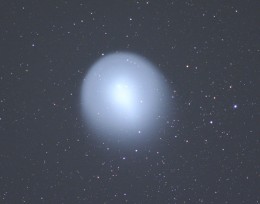 Many saw it as being one of the candidates relating to the “Blue Kachina” prophecy of the Hopi that indicates that a blue sphere such as this would mark the end of time. Indeed, many saw this as “the beginning of the end of time”.  No doubt this added to the speculation about the “end” of the Maya calendar, particularly for those who didn’t realize that we were simply coming to the end of a cycle and not the end of time.

With many new energies flowing through this time frame, there is the potential for things to get a little “heady”, particularly as the energies build up towards the end of the trecena. This is the point where things have the potential to go awry, as happened in Sumatra just after Christmas in 2004 when a 9.1 earthquake ripped apart the ocean floor off the coast of that region and sent a humungous wall of water crashing into 14 countries in Southeast Asia, killing over 230,000 people and washing away entire villages.

As the end of this trecena approaches in late March we will be coming into the zone of the Wayeb’, the five days at the end of the Classical Maya year. Although there are conflicting opinions about the nature of these five days, with some thinking of them as unlucky and others thinking of them as days of rest, they have also been associated with almost “reckless” opulence – as when the U.S. Mega Millions $656 million lottery prize was won by three people in three states during the Wayeb’ in 2012, just after a Brinks tractor-trailer crash in northeastern Ontario scattered 5 million dollars in Canadian coins onto the highway on the first day of the Wayeb’. So the end of this trecena might be a good time to “look sharp.” 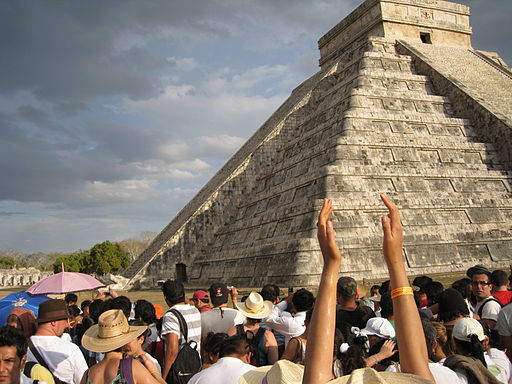 Undulating serpent appearing on the side of the Temple of Kukulcan in Chichen Itza on the Spring Equinox, 2009 [Photo Credit: Bmamlin (Own work), Public domain, via Wikimedia Commons]

Over this thirteen-day period these are the energies that will unfold:

1 Eb’ (Mar. 18th) – the “initiation” of “animating vitality”, the stream-of-consciousness, “find your own path” type of force that influences this entire 13-day time frame

2 B’en (Mar. 19th) – a dynamic type of energy aligned with the “generation” of personal authority, as was in place at the birth of Queen Elizabeth I in 1533

3 Ix (Mar. 20th) – the “activation” of mystery and magic; this time in conjunction with Spring Equinox; Maya birth energy of Taras Shevchenko (see above)

4 Men (Mar. 21st) – a “defining” energy related to the “high vision” of the Eagle; this “double solar” energy is a Burner Day associated with “running with the fire”, an energy that can sometimes bring a great deal of “firepower” (as in the outburst of Comet Holmes, just after the Orionids meteor shower in 2007); coinciding at this time with the UN’s International Day of Forests

5 Kib’ (Mar. 22nd) – a “blessing” or “precision” type of energy associated with the “Vulture’s” high- flying ability to survey and its ability to “clean things up”, as when President Abraham Lincoln was inaugurated under this influence in 1861; at the present time 5 Kib’ coincides with World Water Day and the Western elongation of Venus – its greatest angular distance from the sun

6 Kab’an (Mar. 23rd) – a “movement (or earth movement)” type of energy combined with the “all directions” force of the number six, as when Russia held its first democratic elections in 1991

7 Etz’nab’ (Mar. 24th) –“self-generating flint” – the energy that sparked major solar flares in 2005;  also representative of the “knife-edge” of discrimination, this energy spawned a Global Day of Action in 2007 that involved anti-war demonstrations in cities across the U.S. and in many other countries.  This day in 2014 marks the opening of a two-day international Nuclear Security Summit in the Hague.

8 Kawak (Mar. 25th) – “resurrecting storm”, sometimes associated with the weather and sometimes associated with upheavals, as when Austria-Hungary declared war against Serbia under this influence 100 years ago after the assassination of Archduke Franz Ferdinand near the end of July, triggering the beginning of World War I. Second day of the international Nuclear Security Summit in the Hague; also a Calendar Round return of the energy in place at the time of the perihelion of Halley’s Comet in 1910.

9 Ajaw (Mar. 26th) – an “outwardly projecting”, double-fire type of force associated with the full sun, as manifested in the eruption of the Grimsvötn volcano in Iceland in 2011, and the 6.3 earthquake off the coast of Java in 2006 that killed almost 6000 people and triggered volcanic activity in Mt. Merapi. Also also a Calendar Round return of the energy in place at the time of Mark Twain’s death in 1910.

10 Imix (Mar. 27th) – a “source” based energy aligned with birth; sometimes associated with idea of “the exalted” person – as occurred in 2012 when it marked the 60th anniversary of Queen Elizabeth II’s Accession Day; on this Mar. 27th Venus will be dancing near the crescent moon in the predawn sky

11 Ik’ (Mar. 28th) – “inspirational” wind/breath spirit, in conjunction with the “seating” of the Wayeb’; the energy that was in place on January 1, 2000 when millions of people celebrated the coming new millennium; at this time Venus will still be near the crescent moon in the predawn sky

12 Ak’b’al (Mar. 29th) – a “grouping together” type of energy associated with darkness, as was in place at the time of the 2004  Sumatra tsunami and again  in 2011 when the ash cloud from the Grimsvötn volcano grounded about 500 flights in the U.K.. This time this energy perfectly coincides with Earth Hour – when people the world over (in more than 7000 cities and towns) switch off non-essential lights and power for an hour in the evening, in support of environmental awareness

13 K’an (Mar. 30th) – transformational “generative vitality”; a powerfully exuberant force that can instigate a great deal of action on many fronts, as in 1992 when a massive fire broke out at Windsor Castle, damaging or destroying over 100 rooms and many priceless treasures, and in October of 2012 when Hurricane Sandy churned off the coast of Florida en route to the New York/New Jersey coast. In place this time in conjunction with the New Moon.