Darkness, earth traumas, challenges related to ethics and morality, the terrors of death . . . . this is the domain of the Obsidian Butterfly, overseer of this thirteen day period that currently is coming into place at one of the darkest and dreariest times of year, at a time when the whole world is reeling from the horrific events that unfolded in Paris over the past few days. 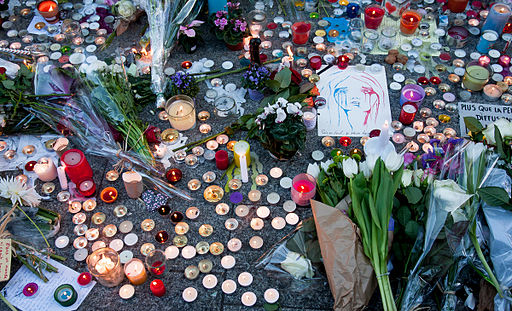 This butterfly goddess (known to the Aztec as Itzpapálotl) is no lightweight will-o’-the-wisp. Sometimes appearing as a seductress but more often with a skeletal visage and knife tipped wings, this is a fearsome warrior on the search for truth. And at the moment she is at the forefront of the search for sanity in a world gone mad at the hands of terror and fear. 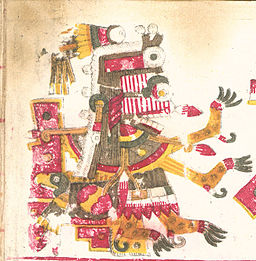 As we make our way through this darkness, which will be filled with funerals, memorials, great change, and deep, deep grieving we have to remember that there will also be healing. Shafts of light that will show the way will start to break through, resolutions will be made to do whatever it takes to return sanity to this planet, and alliances will be formed that will start the process of action. Unfortunately, it is often the “war within the heart”, the war overseen by Itzpapálotl, that triggers the kind of actions that must be taken to overcome darkness. So as fearsome as she may seem at times she can be a definite ally.

What is needed at the moment, of course, is both courage and resolve. For so many, in Paris, on the escape route from Syria and elsewhere, and in so many other regions, personal “life and death” battles are being fought, within unthinkably difficult circumstances. Millions are facing the worst darkness of their lives. Any kind of light, from small candles, to lanterns, to the lights that reside in human hearts, will help people to find their way. And often this struggle actually leads to a clearing of the darkness, an opening that will allow truth and new possibilities to prevail.

In the past this energy sequence that brought a number of “hidden secrets” into the open, as in the exposing of the Watergate incident during the early 1970’s that led to President Nixon’s impeachment, and the exposing (by WikiLeaks in 2010) of a cache of more than 250,000 diplomatic cables and classified documents pertaining to correspondence between U.S. diplomats and their allies and partners around the world.

In May of 2012 this trecena saw tens of thousands of Occupy Wall Street activists clash with police in protest demonstrations across the U.S. and around the world as people vented their frustrations concerning austerity measures, tax hikes, and high unemployment. In early January of 2013 aboriginal communities across Canada engaged in Idle No More protests during this trecena to bring attention to the urgent need for improvements in government implementation of aboriginal rights and agreements.

Late in 2014 issues associated with morality and ethics became so acute within U.S. Congressional chambers that the U.S. government was actually shut down. By the end of the trecena the Senate Chaplain felt it necessary to scold lawmakers for their “shameful” behaviour. He publically offered prayers for members of Congress to be delivered from transgressions, smugness, selfishness, “stubborn pride”, and “from the hypocrisy of attempting to sound reasonable while being unreasonable.” At the same time a horrific typhoon was raging in China, severely affecting four million people, while severe blizzards and storms in the U.S. Midwest and Northeast triggered widespread blackouts. 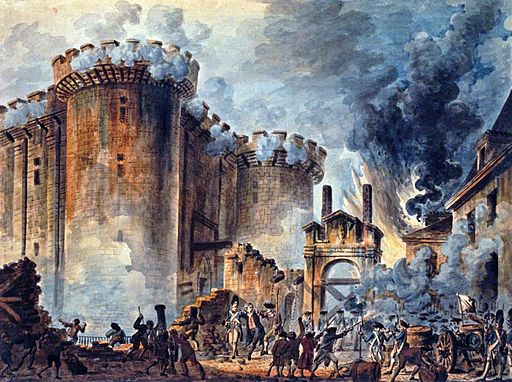 La Prise de la Bastille (The Storming of the Bastille) on the 9th day of this trecena in 1789.
Watercolour painting by Jean-Pierre Louis Laurent Houël. Public Domain via WIkimedia Commons.

So what might we anticipate as we gingerly make out way through what has proven to be a rather dicey time frame? Once again we can look to the past, as it seems quite significant that both the American and French revolutions began on the ninth day during this energy sequence. In the spring of 1775 (240 years ago) Paul Revere made his midnight ride under that Chuwen influence and “the shot heard ‘round the world” kicked off the American Revolution. Fourteen years later (precisely 20 cycles after the first battle of the American Revolution) the people of Paris said “enough” on that same ninth day and stormed the Bastille. It would seem that something similar has just happened in Paris and people the world over are ready for the revolution against terrorism. So what will 9 Chuwen bring this time? 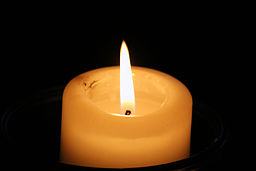 Now – where to begin? Let us recall that being representative of both “Temple” and “House” as well as darkness, Ak’b’al is often associated with “dreaming”, and with the exploration of deep mysteries. So this would be a great time for reflection, for good old-fashioned “soul-searching”, and for the unburdening and cleansing of “old issues” to make room for new possibilities. During this period these are the energies that will come into play:

1 Ak’b’al (Nov. 19th) – the “initiation” of “darkness” (or “contemplation”), in association with deep mysteries; also a good time for reflection and “dreaming”, on the second day of the APEC Economic Leaders’ Summit meeting in Manila

2 K’an (Nov. 20th) – a dynamic type of energy often aligned with new possibilities. On this day Adele will release her new album called “25” – her first album in almost 5 years. This is expected to be the U.K.’s fastest selling album of 2015 as her “Hello” song, her first single in 3 years (released on Oct. 23rd), had over 128 million views in just 6 days. Maya birth energy of Dr. Martin Luther King Jr. who put forth passionate calls for freedom, justice, and brotherhood during the 1960’s.

3 Chikchan (Nov. 21st) – “the activation of lifeforce”; an important Burner Day oriented around the idea of “announcing the fire”, the type of energy that can sometimes “charge” people to take action, particularly if pressing issues suggest the need for consciousness raising. Start of the Winter Festival of Lights, Niagara (the 33rd annual) and Vinterljus (Winter Lights) in Sweden

4 Kimi (Nov. 22nd) – a “defining” force associated with “absolute foundations” representative of the sun in combination with “death” or the point at which “all is revealed” so that regeneration can begin, this time in conjunction with World Crystal Skull Day

6 Lamat (Nov. 24th) – an “everywhere” type of energy associated with the heralding of new ideas, on a day when President Obama meets with French President Hollande at the White House

7 Muluk (Nov. 25th) – a “self-generating”, pivotal, shape-shifting type of energy associated with water, which might be significantly emphasized at this time as this comes in at the time of the Full Moon. In 1968 this was the energy in place when Senator Robert F. Kennedy announced his candidacy for the Democratic presidential nomination. Five years ago this was the energy in place when Yale astronomer Pieter van Dokkum and Harvard astrophysicist Charlie Conroy made public their findings that there could be some 300 sextillion stars in the universe (3 trillion times 100 billion or 3 + 23 zeros).

8 Ok (Nov. 26th) – a “double sun” type of force, symbolic of the “resurrection of love, guidance, and loyalty, this time in conjunction with Thanksgiving day in the U.S. 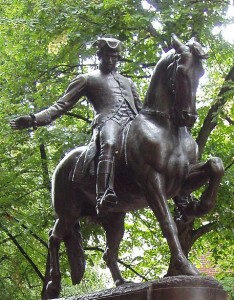 9 Chuwen (Nov. 27th) “outwardly projecting creativity” – the energy in place in 1775 at the start of the American Revolution and in 1789 when the Bastille was stormed in Paris, marking the beginning of the French Revolution.

In January 2013 this energy was in place when U.S. President Barack Obama and Vice-President Joe Biden were sworn-in for the second time.

At this time it corresponds with Black Friday shopping day and the Commonwealth Summit in Malta.

10 Eb’ (Nov. 28th) – “foundational animating vitality”, as was in place when the sizzling 25 ton Aztec Calendar Stone was found by workmen repairing Mexico City’s Central Plaza (the Zócalo) in 1790. On this present evening Woburn Abbey, in Bedforshire, UK will present Nigrum Luminaries Woburnensis, a spectacular evening of Light, Fire, and Ice 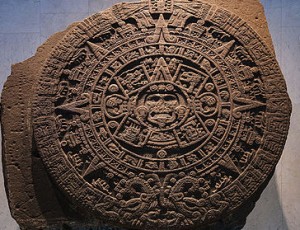 12 Ix (Nov. 30th) – a “gathering together” type of energy oriented around earth forces and deep mysteries; this time in conjunction with the end of the Pacific region hurricane season and the opening of the 2015 United Nations Climate Change Conference in Paris (the 21st yearly session)

13 Men (Dec. 1st) – transformational high vision; a high-energy type of force that can be world- shaping, as was in place in 2014 when NASA tested a new Low Density Supersonic saucer- shaped vehicle designed to land on Mars