As we come to the final day of the “go with the flow” Eb’ trecena, we arrive at 13 K’an, representative of transformational generative vitality. This is a vigorous – even explosive – energy that has a tendency to gather up all that Eb’ freshness and potential into a crescendo that often erupts into things such as hurricanes, volcanoes, earthquakes, or other monumental events (not always bad – sometimes very good – but generally robust!)

In Maya mythology K’an is aligned with the young Maize God who represents the engendering force associated with prolific harvest. This is an exuberant energy oriented around the idea of limitless possibilities and prodigious abundance, particularly with regard to the treasures of the earth. 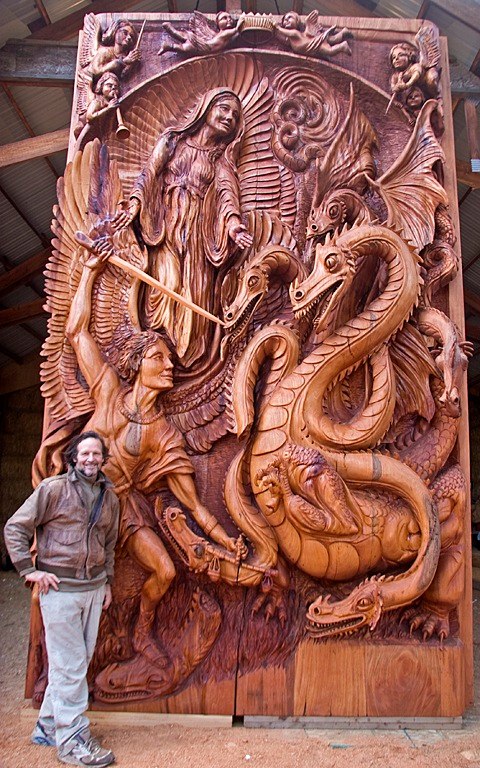 J. Chester (“Skip”) Armstrong with his St. George and the Dragon panel

There is also a “mastery of the arts” aspect associated with this daysign, and many born under its influence tend to have an abundance of creative energy – as seen, for instance, in the opulent phantasmagorical works of fashion designer Jean Paul Gaultier, and in the seemingly limitless musical talents of singer-songwriter-performer Bruno Mars. It can also be seen vividly in the works of J. Chester (“Skip”) Armstrong, acknowledged by many as central Oregon’s best known sculptor.

A self-taught creator who works with chainsaws, grinders, and chisels, Skip releases magical forms and beings such as eagles, otters, and herds of deer and horses from old gnarly pieces of wood. Like Michelangelo, he “sees the beings” in the wood and sets them free. And like Michelangelo he also carves angels, saints, and muses (as shown on his website and in his “Dancing With Wood” video shown on that site).

There is a great immediacy in the way he works – an effervescent spontaneity that is highly reflective of the young Maize God. The narrator of an Oregon Art Beat video mentions that Skip seems to work “nearly at the speed of thought”. In this wonderful overview that shows his creative process Skip also mentions how he was inspired several decades ago by Maya temple ruins and the durability of their art.

It seems that this interest has stayed with him as he recently created a massive relief panel (5 panels spanning 25 ft.) depicting the Maya creation myth tied in with the Mexican Day of the Dead idea, which he titled “The Bones remember . . .  Dia de los Muertos”. 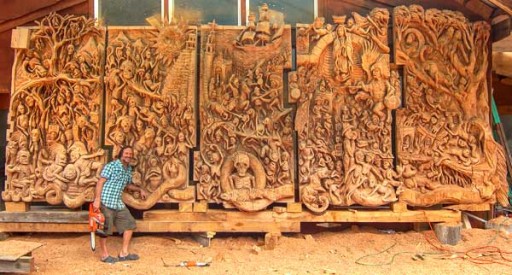 The panel incorporates a large number of symbols reflective of Mayan history including the birth of the first people from maize (a very K’an-based concept), the HeroTwins, the Tree of Life, the rebirth of the Maize Deity, the Spanish Conquest and the influx of Catholicism, the jaguar, the feathered serpent, and lots of maize. It’s almost a definitive 13 K’an statement, made for a high-end Mexican restaurant in Las Vegas, which is also very K’an-aligned, from the point of view of opulence. Click here for further photos. 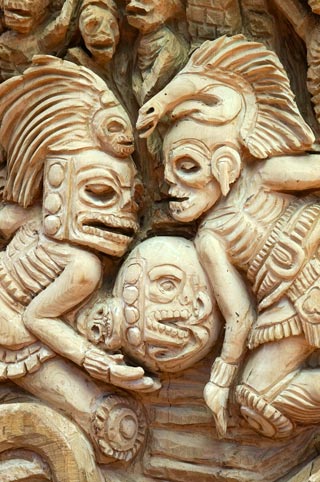 Detail from the Maya panel

Created in a mere six weeks (click here for the video of the process), the piece was begun on a 4 Chikchan day (a “burner” day representing the “defining of lifeforce”, associated with the feathered serpent), and unveiled on a 13 B’en day (“transformational personal authority”) in the summer of 2012. Click here to see the newspaper article (with photos) that was published in the Las Vegas Sun on Dec. 7th (Maya date 3 Kimi – “the activation of “death”).

Although this work was primarily rough-hewn, as per the client’s request, most of his works are beautifully finished, gracing many private collections . He sees the creation of each piece as “an adventure”, and often places emphasis on the process of “transformation” (one thing morphing into something else, as in “Butterfly Transformation Woman” as shown in the Oregon Art Beat video), which is highly reflective of the nature of his 13 K’an birth energy.

Indeed, that sense of motion – of energy in the state of transition – characterizes most of Skip’s works. And this is precisely in keeping with the nature of the “13” in his Maya birth energy.

In the Dancing With Wood video Skip described himself as being “part of a flow of time, a rhythm flow, a spontaneous motion, an explosive dynamic energy”. He seems to be, from the perspective of the Maya Calendar, the very embodiment of 13 K’an.