He loved to create, to push boundaries, to infuse a freshness of spirit into every moment, every encounter, every action. His flashing eyes, quick wit, quirky sense of humour, elegance of manner, endless inventiveness, and warmth of spirit endeared him to hundreds of millions worldwide.

From the perspective of the Maya Calendar David Bowie was the “definitive monkey” (Four Chuwen), a double-sun type of force that blends the power of the Sun God (symbolized by the number Four) with boundless creativity (Chuwen, one of the “carriers” of the sun on earth). This association with inventiveness and creative genius is mentioned in a variety of ancient Mesoamerican codices as being the essence of this energy.

Chuwen was seen as being a highly charismatic force, containing the potential for mastery in all the arts, with individuals born on such days often seeking continuously to reinvent themselves. They were characterized by exuberance, spontaneity, showmanship, charm, merriment, grace, good fortune, and even, at times, rebellion and roguishness. Through its connection with the sun and time, this monkey-oriented energy was aligned with divinity and seen as the ultimate weaver of time.

All of this, of course, is reflective of David Bowie, and helps to explain Rebecca Tucker’s comment in the National Post, shortly after the announcement of his death. As she notes: “The overall impression of David Bowie is not just one of otherworldliness, but immortality. Today, it seems unfathomably that someone whose existence sat on a plane so far above the corporeal could simply – mundanely – die.” She captures the essence of his “chuwen-ness” when she notes that “it wasn’t just an inherent weirdness that Bowie normalized, but a studied weirdness; not so much an unwillingness to conform to anything resembling the ordinary but a willful, complete ignorance of the fact that ‘the ordinary’ even exists . . . . there’s an over-all sense you get from him that it’s all right to do things – strange things, intellectual things, creative things, ANY things – just because you feel like doing them, even if you can’t explain why to anyone but yourself.” 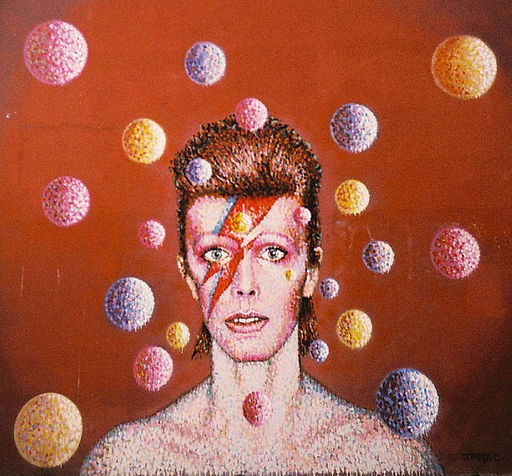 Similar observations were noted by Paul Kinder of Bowiewonderworld.com who called Bowie the world’s “first truly post-modernist star”, pointing out that after living each legendary character to the utmost, Bowie “deconstructed that which made him singular, then a new element would arise to confound and entice the masses who thought they had just figured out his latest incarnation . . .”

Referred to by British Prime Minister David Cameron as a genius who “provided a lot of the soundtrack of our lives”, Bowie was the ultimate showman, the man who “thrilled the world” with his dazzling star power. As noted in the current trecena blog, this “star” quality came not only from his birth energy, but also from the influence of the star-oriented qualities of the Lamat (star) trecena. Others who carry this Four Chuwen energy (such as Iman, his lovely wife) often exhibit many of these qualities, but no one exemplifies this combination more dazzlingly than Bowie. As Kate Bush mentioned in her tribute to him, “there are great people who make great work but who else has left a mark like his? No one like him.” 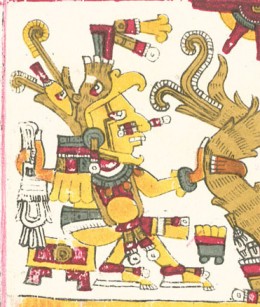 She is correct, of course, from many perspectives, as shown by the Maya Calendar which can pinpoint the uniqueness of any given day. Within the Maya Long Count David Jones/Bowie was born specifically on a day known as 4 Chuwen 4 K’ank’in G4, an energy combination that occurs only once in 468 years. So in addition to the “Solar Monkey/ Sun” energy described above there was further solar energy involved through the sun (4) working in combination with the month known as K’ank’in (Yellow Sun/Precious Sun) and the Mesoamerican deity known as Cinteotl, the Night Lord that is codified in the Long Count as G4. This entity was the Maize God, a highly revered deity  associated with the sun. He was generally portrayed as a young man with yellow body colouration and an elaborate headdress who was often portrayed as a duality – both masculine and feminine. One of his traits was a jagged black line passing down his eyebrow, through his cheek, and finishing at the bottom of his jaw line. Hmmmm – is there anyone else you know who has these characteristics and painted his face in a similar manner? Given that he carried all this solar energy it is not surprising that he shone as brightly as he did. 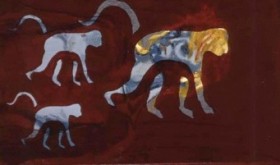 Referred to by Pete Townshend as his Salvador Dali, Bowie was described by his friend as being “a charismatic and exotic creature” who was “still gloriously beautiful even as he approached 70”. Townshend saw him as “funny, clever, well-read, excited by the arts” and “simply a joy to be around, so good at making everyone feel at ease”. He speaks for his nation when he said “We have lost a monumental figurehead of the British arts scene.” He speaks for all of us when he said “We have also lost a wonderful clown whose combined sense of mischief and creativity delightedly touched our hearts.”

A poignant cartoon in the New Yorker on Jan. 11th echoed Bowie’s lyrics from Space Oddity, “The stars look very different today.” Gratefully, we can look into the sky now, and if the stars are out and we are studious, we may be able to make out the asterism that was named for him by Belgium astronomers. As he prepared for his return to the stars he told us to look up because he’s in Heaven. We will look for him there and we WILL remember him.

“I don’t know where I’m going from here, but I promise it won’t be boring.”  David Bowie from Madison Square Garden, 1997 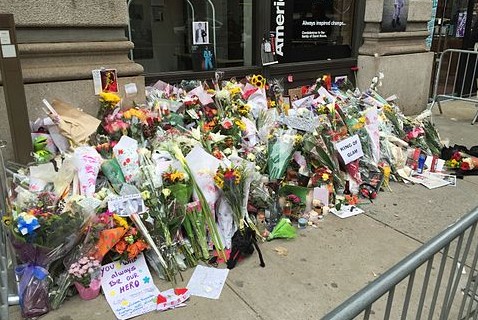 Memorial outside of Bowie’s apartment in New York shortly after his death.
Photo Credit: David Shankbone (Own work) [CC BY 3.0 (http://creativecommons.org/licenses/by/3.0)], via Wikimedia Commons