Strength, Sovereignty, Transcendence, Wisdom, Power, Acumen, Lofty vision – these, and many other, words come to mind in any attempt to describe “Eagle”. 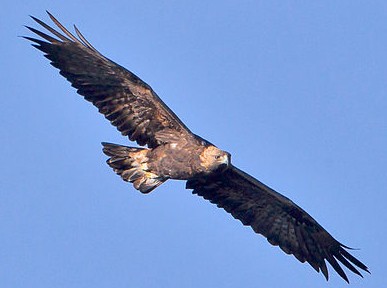 Seen by the Maya as an avatar of the sun, the eagle is not only representative of acuity and high-flying ideals, but also of strength, wisdom, and renewal. There is also a strong “airborne” aspect to this energy, as could be seen the last time this trecena was in place, when it started with a “bang” as six volcanoes erupted in six countries all on that same One Men (‘Initiating Eagle”) day. This was followed, at various points throughout the trecena, by a number of events that compelled people to look skyward, including a meteorite explosion over Quebec, the launch of China’s lunar probe, and the tracking of Comet ISON, which ultimately fizzled out as it attempted to graze our sun. There were also a large number of intense weather events, which again seem to be in the works for this trecena as another major typhoon (Halong) is heading directly towards Japan and back-to-back hurricanes are heading for Hawaii. 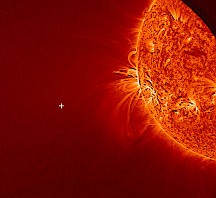 An image from NASA’s Solar Dynamics Observatory that shows the sun, but no Comet ISON. The white plus sign is where the Comet would have appeared if it had survived the journey around the sun. Photo Credit: NASA/SDO [Public domain], via Wikimedia Commons

On its last appearance this same 13-day period saw  sixty-three women from around the world make like eagles as they linked up in the sky over an Arizona desert in order to break the vertical formation skydiving record (see video) . This time, on the third  day of this time frame, we will have a Supermoon event, the largest of the year.

As the powerful “initiating” energy of One Men (One Eagle) kicks off this thirteen-day period these forces associated with “wisdom”, power, and lofty vision will be in play at the same time as a Superior Conjunction of Mercury, aka the “Full Moon” of Mercury. Excellent timing, as this seems to be in keeping with the tenth anniversary (just a few days ago) of the launch of the Messenger spacecraft on its Mercury oriented mission. 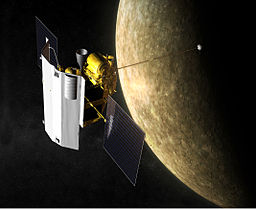 This planetary conjunction is an energetic influence often associated with the amalgamation of ideas and the creation of new patterns or realities, which will likely be augmented by this additional alignment with the eagle trecena.

At this trecena gets underway several intriguing events will take place, including a special gathering at the UN Headquarters in New York involving UN dignitaries and representatives of indigenous communities as a prelude to the International Day of the World’s Indigenous Peoples, which will be celebrated the following day. The goal is to focus attention on ways to implement the rights of indigenous peoples at both national and international levels.

Also scheduled for the first day of the trecena is a Global Meditation for Peace, with the goal of attempting to set the Guiness World Record for the largest meditation gathering in history. This ties in with Eagle’s ability to be an extraordinary healer, through its wisdom and compassion, as seen in the story about an eagle named Freedom, which involved the mutual healing of a man and an eagle (click here). Hopefully that will be the kind of energy that permeates this time frame.

At various times in the past this trecena has been a time frame wherein people start to really dig in, often becoming “warriors”, in efforts to bring resolution to problematic situations. This was seen quite vividly when the U.S. declared war against Iraq on the first day of this period in 2003, at the same time as intense anti-war demonstrations were unfolding worldwide. In 2011 the beginning of this trecena brought forth major street riots in Tunisia that initiated the downfall of that country’s government, the first major denouncement of authoritarian rule and demand for democracy in the Arab world, a situation that instigated a wave of revolutionary events throughout that region.

A few days after the initiation of the Tunisian revolt major eruptions broke out on the streets of Cairo when tens of thousands of Egyptians clashed with government forces, building up to a “Day of Rage” in that country, on the last day of the trecena. That was also the day when anti-government protests broke out in Syria. One cycle after that, in October of that year, a day of “Global Revolution” unfolded at the end of the trecena as the “Occupy Wall Street” movement against social and economic equality spread to hundreds of cities around the world, in 82 countries. 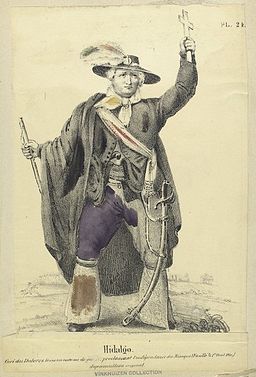 And on the last appearance of this trecena . . . . . that was when anti-government protests began in Ukraine when the government declined to sign association and free-trade agreements with the EU. So that “time to stand up and fight for a cause” aspect is often very strong at this particular time.

Within Mesoamerican mythology Eagles were also associated with the kind of strength and power exhibited by warriors, as seen in the life of Miguel Hidalgo y Costilla, the visionary pastor of a poor parish in Mexico, who was born on a One Men day in 1753. During a time of great oppression by the Spanish it was Hidalgo who gave the firey “Grito”, the “Cry of Independence” that started the Mexican War of Independence in 1810. His rallying cry against oppression was so inspirational that he is now known as the Father of Mexican Independence.

Indeed many brave warriors were born during this time frame, including the extraordinary Malala Yousafzai, the extraordinary advocate of education for girls in Pakistan who not only survived a Taliban assassination attempt in 2012, but has continued to thrive and pursue this important cause.

A false-color radar image of Central Africa, showing the Virunga Volcano chain along the borders of Rwanda, Zaire and Uganda – home to the endangered mountain gorillas (the focus of Dian Fossey’s work). Image was acquired on April 12, 1994, on orbit 58 of space shuttle Endeavour by the Spaceborne Imaging Radar-C/X-band Synthetic Aperture Radar (SIR-C/X-SAR). Photo By NASA/JPL (http://photojournal.jpl. nasa.gov/catalog/PIA01724) [Public domain], via Wikimedia Commons

Dian Fossey’s Maya birthday is the day after Malala’s. Known as the “Gorilla Girl”, for her extensive work with gorillas, Dian was honoured with a Google Doodle on a Chuwen (Monkey) day last January, on what would have been her 82nd birthday.

So again the choice is presented as this trecena provides the opportunity to become “actual” warriors, where weapons are picked up and hurled, as has happened so often in the past, OR spiritual warriors where strength, compassison, vision, and wisdom are employed.

Perhaps Mercury will help us at this time, so that lessons learned from the past don’t have to be repeated, and wise council and compassionate communication are put into action instead of rockets and missiles. Here are the energies that will come into play:

1 Men (Aug. 8th) – the “initiation” of the Eagle’s lofty vision; a “posturing for supremacy” type of force, this time in concert with Mercury at Superior Conjunction, as Japan and Hawaii brace for the intense weather systems headed their way. This takes place on a day when a Global Meditation for Peace will be held, which has the goal of attempting to set the Guiness World Record for the largest meditation gathering in history. (see above)

This is also the opening day for the Shambhala Music Festival near Salmo, B.C., which has been called “one of the finest electronic music events in North America”, with music presented on six individually-themed stages  (Aug. 8-11).  Also on this day – a special event at UN Headquarters in New York involving UN dignitaries and representatives of indigenous communities as a prelude to the International Day of the World’s Indigenous Peoples, which will be celebrated the next day (see above and below).

2 Kib’ (Aug. 9th) – a “dynamic” type of energy that can “shake things up” but is ultimately aligned with the transmutation force that can lead towards the restoration of order; this time in conjunction with International Day of the World’s Indigenous Peoples. The theme for this event this year is “Bridging the Gap: Implementing the rights of Indigenous Peoples”, a prelude to the World Conference on Indigenous Peoples which will be held at the UN in New York in mid September.

3 Kab’an (Aug. 10th) – the “activation” of “movement” or “earth movement”, this time in conjunction with a Supermoon, the largest full moon of the year – with the moon only 221,765 miles from Earth); 110th anniversary of the intense Battle of the Yellow Sea between Russia and Japan during the Russo-Japanese war in 1904 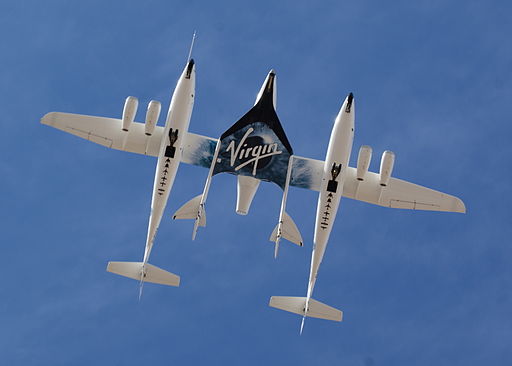 4 Etz’nab’ (Aug. 11th) – a “defining” type of energy aligned with Etz’nab’s sparkling, “knife-edged” dazzle; exactly four cycles since thousands of people launched the nonviolent “Stop the Machine! Create a New World” occupation of Freedom Plaza in Washington D.C. in 2011; birth energy of the “luminous” visionaries Jules Verne (see below) and Sir Richard Branson (founder of the Virgin group of companies that include Virgin Atlantic Airways and Virgin Galactic) 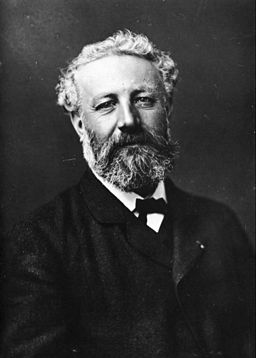 Jules Verne, author of science fiction adventure novels such as “Twenty Thousand Leagues Under the Sea” and “Around the World in Eighty Days”. Photo Credit: Felix Nadar [Public domain], via Wikimedia Commons

5 Kawak (Aug. 12th) – the “blessing” of compassion; a precision kind of energy that can stir compassion or start a storm, clearing the path towards enlightenment; this time in conjunction with the Perseids Meteor Shower. Maya birth energy of Malala Yousafzai (see above).

6 Ajaw (Aug. 13th) – an “everywhere” type of energy associated with full sun/the power of enlightenment, as was in place in 1920 when the 19th amendment was adopted in the U.S., giving women the right to vote. Perseids Meteor Shower still in place. Birth energy of Dian Fossey (see above).

7 Imix (Aug. 14th) – “self-generating” birth, an energy often asssociated with the envisioning of a “new order of being”, as when Hernán Cortés and his Spanish conquistadores arrived at Tenochtitlan (Mexico City) under this energy influence in 1519 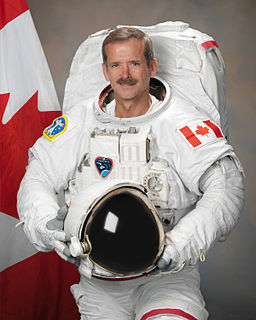 8 Ik’ (Aug. 15th) – the “resurrection” of wind/breath/spirit, symbolic of the sun working together with the wind/breath/spirit aspect of Quetzalcóatl, this time in conjunction with the 67th anniversary of India’s Independence Day. Two cycles since the March 2013 election of Pope Francis I and the handing over of the command of the International Space Station to Chris Hadfield, the high-flyer who was the first Canadian to walk in space.

9 Ak’b’al (Aug. 16th) – an “outwardly-projecting” type of force often aligned with the “temple” or “house”, and deep esoteric mysteries

10 K’an (Aug. 17th) – “foundational germination”, as in the coming into effect of the Emancipation Proclamation in the U.S in 1863; can be quite volatile, as in the generation of strong weather conditions or in the eruption of strong emotion-propelled action (as was in place at the beginning of the Egyptian and Syrian Revolutions in 2011)

11 Chikchan (Aug. 18th) – inspirational Lifeforce, aligned with Liberation and Higher Consciousness; a Burner Day traditionally associated with “extinguishing the fire” – often signalling some kind of change in direction. This time this energy is in place at a time when Venus and Jupiter are cozying up to the Beehive Cluster (aka “the crib or cradle” of about 1000 stars).

13 Manik’ (Aug. 20th) – “transformational deer” in conjunction with the New Fire anniversary of the day when the USSR agreed to send arms to Cuba in 1962. As Manik’ is a “carrier” of the sun and is sometimes associated with sacrifice, this can be a powerful force that can compel people to unify and forge ahead towards a common goal, as was the case when Mexico’s presidential election was won by Enrique Peña Nieto under this influence in 2012, and when the new Israeli government was sworn in under this influence in 2013. This energy also kicked off the Syrian revolution.