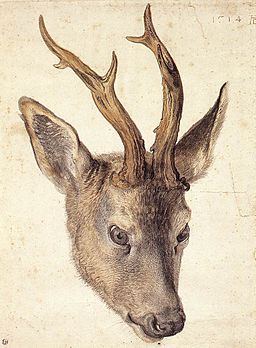 Albrecht Dürer, Head of a Stag, watercolor on paper, circa 1503. [Public domain], via Wikimedia Commons.

As it seemed that jaguar power was in full force during this past trecena, the implications of that huge transformative push still remain to be revealed. Most remarkable was the enormous scope of people-power that manifested to lend their voices to such things as Scotland remaining in union with the UK, the protests in Moscow against the Ukraine-Russia conflict, the huge pro-democracy rallies in Hong Kong (still underway), and the historic People’s Climate Change demonstrations that took place world wide in a united call for significant action to deal with issues associated with global warming. Overall it was an extreme push as people “stood their ground” in their calls for change.

And now, as the Manik’ trecena comes into being many will likely be trying, once again, to take a breath and find their way back to some kind of balance. With the arrival of the Manik’ trecena, symbolized by a Deer or Stag, opportunities to regain some stability may now be presented. Oriented around the provision of sustenance and aligned with the idea of restoring harmony, this would be a good time to step back a bit and regain equilibrium.

The overall theme for this 13-day time frame is Sacrifice and Reconcilation, which suggests that a considerable amount of “give-and-take” may be required in order to achieve that new stability. Fortunately, one of the main patrons of this time frame is a deity who is oriented towards the erasing of transgressions, so this may be a good time to seek forgiveness or pardon for past issues.

On a global level, however, there are many issues that are deeply entrenched, with this trecena marking the return of energies associated with a number of events that still greatly influence human dynamics. October 1st, for instance, marks the 65th anniversary of the proclamation of the People’s Republic of China. That will be Maya Date Three Muluk, a high powered energy that has been aligned with many significant events in the past, including the first inauguration of President Obama (in 2009), the first inauguration of Hugo Chávez (Venezulela) in 1999, the death of Princess Diana in 1997, and the horrendous earthquake and tsunami in Japan in 2011. 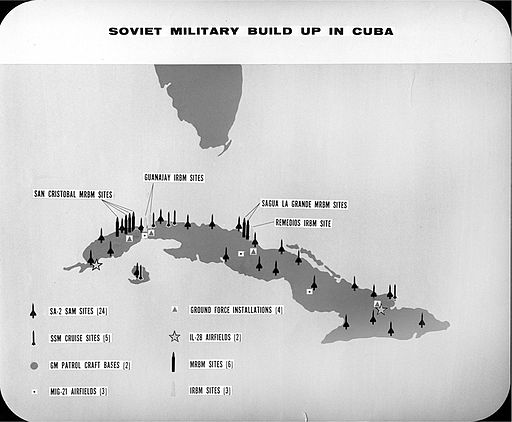 This return of this force will mark the “New Fire” anniversary of the exact energy that was in place in 1962 when the U.S. obtained photographic evidence of Soviet missile installations in Western Cuba, which triggered the Cuban missile crisis. At that time Soviet submarines were in the mid-Atlantic en route to Cuba, fighting their way through a huge storm in the Sargosso Sea (mid-Atlantic), and tens of thousands of armed soldiers were already in Cuba. The final day of this trecena marks the New Fire anniversary of the day when the highest level of warning was given regarding nuclear threat from the Soviets during that crisis, a “game-changing” point for President John F. Kennedy. Fortunately for us all that crisis was averted.

Even though we will see a return of those energies, it doesn’t mean a repeat of those same events – although Russia is still managing to be in the centre of yet another significant conflict. As it happens this was also trecena during which the Berlin Wall was dismantled in 1989 and the U.S.S.R. was dissolved in 1991.

As this trecena brings in the first days of October, we will see such things as World Animal Day, World Teacher’s Day, World Sight Day, and World Mental Health Day all within the context of this time frame. World Animal Day, aligned with the Feast Day of St. Francis of Assisi, the patron saint of animals and the environment, is a special time for many Blessing of the Animals events.

The middle of the trecena brings in 7 B’en, the authoritative energy that was in place in 2011 (five cycles ago) at the beginning of the Syrian Uprising. Since that time the death toll in that country has surpassed 150,000 people, millions have been displaced, and millions more are just barely existing in desperate conditions.

Towards the end of this Sacrifice and Reconcilation time frame the energies can often be particularly intense, sometimes bringing forth world rattling events that have fomented “storms” of one kind or another, as when thousands of people took to the streets of Moscow under the influence of the last two days of this trecena in December of 2011 to protest against procedural violations in the previous day’s Russian parliamentary elections. Given the increasing number of demonstrations that often take place towards the end of many trecenas, as in the massive one taking place at the moment in Hong Kong, it may well be that this trecenas will again see some of that kind of action at that time.

The final day of this trecena is also the Maya birthday of Narendra Modi, India’s new Prime Minster, who won a landslide victory in India’s general election last May. At the end of the last trecena Modi received a raucous welcome in New York, where he was welcomed by over 18,000 supporters in Madison Square Garden. As Modi meets with President Obama on the first day of this trecena, this will surely be a landmark time period for him personally. 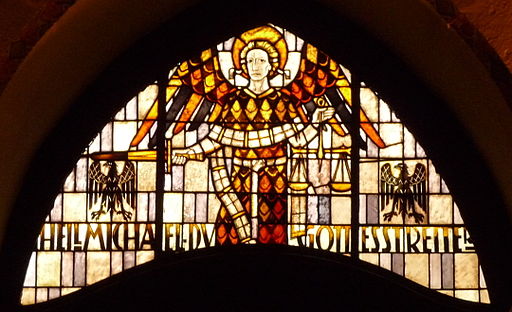 St. Michael (Warrior of God) in stained glass. Photo credit: Warburg (Own work) [CC-BY-SA-3.0 (http://creativecommons.org/licenses/by-sa/3.0)], via Wikimedia Commons. The start of this Manik’ trecena coincides with Michelmas, the Feast Day of St. Michael.

Although it is not possible to predict the exact nature of the “Sacrifice and Reconcilation” that may unfold during the 13 days of this trecena, it certainly can be a time of “testing” that can require people to deal with any issues that may have recently arisen – again, working towards the goal of regaining some sense of balance. As this unfolds, these are the energies that will come into play:

1 Manik’ (Sept. 29th) – the “initiation of reciprocity”, this time in conjunction with Michelmas – the Feast of St. Michael and all the angels. The day that President Obama and India’s Prime Minster Narendra Modi meet at the White House.

3 Muluk (Oct. 1st) – the “activation of water”, often a powerful “shape-shifting” type of force, this time in conjunction with the 65th anniversary of the proclamation of the People’s Republic of China and the New Fire return of the start of the 1962 Cuban missile crisis

4 Ok (Oct. 2nd) – a “defining” Burner Day representative of fire (or heart-fire); this particular energy can often stir the emotions as it is a “double-fire” type of force; in 2011 the explosion at the Fukushima nuclear power plant in Japan (after the tsunami) took place under this influence

5 Chuwen (Oct. 3rd) – a “precision” oriented energy in combination with play or even mischief; a “timeweaver” type of energy that can bring about change

6 Eb’ (Oct. 4th) – generally representative of “restorative vitality everywhere”, this time in conjunction with World Animal Day, the Feast Day of St. Francis of Assisi, the patron saint of animals, and the autumn rendition of Astronomy Day. Also the day when Mercury goes retrograde.

7 B’en (Oct. 5th) – a “self generating personal authority” type of energy, this time in conjunction with World Teachers’ Day and the fifth Tzolk’in anniversary of the beginning of Syrian Uprising

8 Ix (Oct. 6th) – “resurrecting Jaguar” – this is Santo Mundo, a special Maya day devoted to the Celebration of the Earth and its sacred mysteries

9 Men (Oct. 7th) – the “outward projection” of vision (as in the high-flying vision of the Eagle); a Tzolkin anniversary of Princess Diana’s funeral in 1997

10 Kib’ (Oct. 8th) – a “foundational restoration” type of energy which can fluctuate between the setting up of important foundations (as in the setting up of the nuclear non-proliferation treaty in 1968) to the kind of massive “clean up” that was required in China in 2008 after the Szechuan earthquake. This time in conjunction with the Full Moon, a Total Lunar Eclipse, and the first day of the Draconids Meteor Shower.

11 Kab’an (Oct. 9th) –the energy of “change” combined with the force of evolutionary movement, in conjunction with the second day of the Draconids Meteor Shower.

12 Etz’nab’ (Oct. 10th) – a powerful “knife-edge” type of force that can bring forth powerful separation (or “sacrifice-related”) events, as in the execution of Anne Boleyn in 1536 and the assassination of Abraham Lincoln in 1865. This time this falls in conjunction with the UN’s World Sight Day and World Mental Health Day.

13 Kawak (Oct. 11th) – “transformational storm”, a highly intense force that has coincided with a number of devastating natural disasters such as the 9.2 earthquake in Alaska in 1964 (the most powerful ever recorded in North America), and Hurricane Dennis that caused billions of dollars worth of damage across four states in 2005. In 1962 this was the most critical day during the Cuban missile crisis. In 2013 this energy activated Popocatepetl volcano near Mexico City and coincided with a solar eclipse. On its last appearance (in Jan. of this year) riots spread from Ukraine’s embattled capital of Kiev to nearly half the country, with people demanding the resignation of President Vikto Yanukovych. Huge fireballs lit up the night sky in central Kiev, and angry demonstrators hurled firebombs, rocks, and fireworks at riot police. Protestors occupied a number of government buildings in several cities in western Ukraine and government buildings in many places were beseiged. “Fingers crossed” that things will be a little calmer this time – but this is an intense one , so best to be vigilant.