It was a sight to behold – that gorgeous teal-glinting comet with the long streaming tail – and it kept everyone guessing for several days as it rocketed towards the sun, disappeared, and then re-emerged like a phoenix, only to seemingly dissipate like a ghost of itself after its dramatic rendezvous. Originally dubbed the Comet-of-the-Century, the 4.5 billion year old Comet ISON put on a spectacular performance during the final days of its herculean journey through the cosmos. And we were granted the unprecedented privilege of being able to watch this play out, due to the magic of NASA/ESA’s solar technology – throughout the Eagle trecena. And now, with the Lamat trecena coming in, the last whisps of that cosmic visitor are trailing off into the stars. (Click here for a lovely “In Memoriam” tribute.)

So what WAS that? “Just” one of those space-related marvels that happened to cross our path? An omen, as when Montezuma saw a great comet just before the fall of the Aztec empire (click here)? A signal? No doubt there will be much speculation as earthlings continue to reflect on the phenomenon.

Whatever it was, its last gasp is coinciding with a trecena that tends to herald change. This is Lamat, aligned with Venus, the star that was seen by the ancient Maya as the herald of forthcoming shifts. In many related cultures it was also seen as the Rabbit that can signal “warnings”.

The beginning of this trecena signifies the start of a time frame that can bring forth the kind of leadership that can shed light on new possibilities, as exemplified by the life and work of Russian nuclear physicist and human rights activist Andrei Dmitrievich Sakharov, a Nobel Laureate who warned of the dangers of nuclear testing. 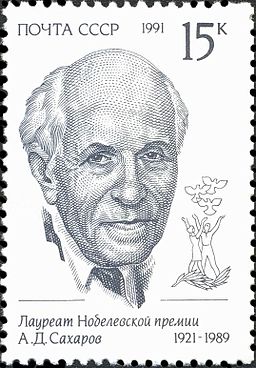 Portrait of Nobel prize winner Andrei D. Sakharov on a 1991 Soviet postage stamp, just prior to the dissolution of the USSR
(courtesy of Wikimedia Commons)

Born on the day 1 Lamat in 1921, Sakharov became a strong advocate for freedom of speech and greater civil liberties in the Soviet Union. Such advocacy seems to align him with one of the major patrons of this 13-day period – a deity that represents the sacrifices that are often required in order to foment change. Even though he was required to endure extreme hardships for his dissident stance, through confinement by authorities, Sakharov continued to be a strong champion of freedom and advocate for disarmament. In 1988 the European Parliament created the Sakharov prize for Freedom of Thought in his honour. An asteroid has also been named after him, as well as one of the shuttlecraft in one of the Star Trek series.

His life and contributions also tie in with the other patron of this trecena, which is the Lord of Fire and Time, a deity connected with time related change, as in cycle endings. He shows up here since this particular trecena is the last trecena in the 260 day cycle that began on One Imix last April. Often the events aligned with this trecena set the stage for many new beginnings. Intriguingly, Sakharov completed his life’s work just two years prior to the dissolution of the Soviet Union. 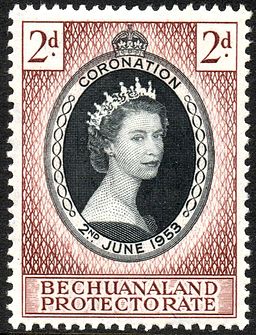 One of the many types of stamps issued to commemorate the coronation of Queen Elizabeth I , June 2nd, 1953 (Maya Date 1 Lamat)

In the past, many momentous “game-changing” events having occurred under this influence, as in the discovery of gold in California in 1848; the assassination of Czar Nicholas of Russia and his family in 1918; the bombing of Hiroshima and Nagasaki in 1945, followed by the unconditional surrender of Japan at the end of World War II; the coronation of Queen Elizabeth II in 1953; the passage of the Civil Rights Act in the U.S. in 1957; the first major Greenpeace event, in 1975; the completion of the deconstruction of the Berlin Wall in 1990; the storming of Baghdad by U.S. forces in 2003; and the formal recognition of the Syrian National Council in 2011.

On the last appearance of One Lamat there was a “seismic shift” in Rome, with the election of a new pope, who took the name of Francis, in honour of St. Francis, one of the patron saints of Italy. 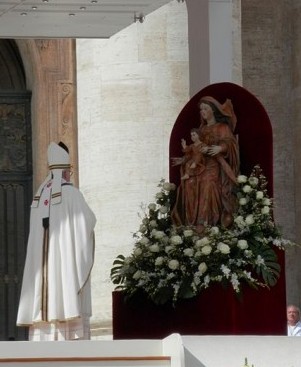 So this was, indeed, the “initation of Leadership and Renewal”. Precisely one cycle before that the day One Lamat saw the unleashing of an intense solar flare from a M5.6 solar storm, so it will be interesting to see if there are any other “celestial signals” this time ‘round (apart from the remnants of Comet ISON).

The middle of the trecena is often a critical time, as in 1922, when the control of Italy was handed over to the Fascist leader Mussolini under the influence of 8 Men. That same energy saw Germany seized and occupy Czechoslovakia in 1939 when the leaders of France and Britain failed to help to defend that country against German invasion.

Indeed, this has been the trecena that has brought many political tensions to a head in recent years, resulting in sweeping reforms that have included dramatic changes in leadership, as seen when the revolutionary wave that became known as the Arab Spring began during this time frame four cycles ago. This wave included huge anti-government demonstrations, Tunisia’s first democratic elections (after the ousting of a dictatorial regime), and a jubilant proclamation of the complete liberation of Libya after the death of Col. Gadhafi, all within this trecena.

In Feb. of 2011, on the last day of the cycle (13 Ajaw) hundreds of thousands of people poured into Cairo’s Tahrir Square, all awaiting the moment (which came the next day) when Egyptian President Mubarak would relinquish his presidency. Then in June of 2012, again at the end of this trecena, Mohammed Morsi took the oath of office in Egypt to become Egypt’s first freely elected president. And now – right on schedule – the draft of a new constitution is being presented to the Egyptian people during this trecena. Although it allocates a great deal of power and autonomy for the military, the new constitution provides for much greater freedom of expression for the people, including a guarantee of “unbridled freedom to create” for artists, writers, and filmmakers. If accepted by the people this will provide that country with a new frame of reference for restructuring.

But it is not only the Arab world that is undergoing these kinds of changes. Over the past week or so the news has been filled with reports of major anti-government protests in Thailand, with demonstrators occupying key government buildings and calling for the resignation of Prime Minister Yingluck Shinawatra. In Kiev last weekend some 300,000 protestors defied a government ban in order to protest against the Ukrainian president’s refusal to sign a landmark trade deal with the EU two days earlier. As protestors demonstrated in front of the Ukrainian capital, they called for the impeachment of President Yanukovych.

And even in Canada things have been significantly rocky on Parliament Hill, with “non-confidence” being the word of the day. This trecena will see the introduction in the House of Commons of “The Reform Act, 2013” bill which has the potential to shift the balance of power away from leaders. Indeed, as Andrew Coyne put it, in his “Turning Parliament Upside Down” article of Nov. 30th, this is a bill that “contains the seeds of a revolution”.

So as this “Leadership and Renewal” trecena gets underway, the shaping of new forms of leadership once again will be high on the agenda in many parts of the world. Whatever changes are in the wind over the next 13 days will set the foundations for the start of the new “birth” cycle that will follow at the start of the next trecena. As this Lamat trecena unfolds these are the energies that will come into being (days of particular importance are highlighted in red):

1 Lamat (Dec. 4th) – the “initiation of leadership”, this time in conjunction with the New Moon; one Tzolk’in cycle since the inauguration of Pope Francis earlier this year

2 Muluk (Dec. 5th) – the “dynamic shape-shifting” energy of water, this time in conjunction with the last day of Hanukkah and the 86th birthday of King Bhumibol Adulyadej of Thailand (aka Rama IX), the world’s longest reigning monarch; the day in which “The Reform Act, 2013” bill will be introduced in Canada’s House of Commons

3 Ok (Dec. 6th) – a Burner Day representative of the “activation of fire or (heart-fire)”, as when powerful solar flares were unleashed under this influence last year; as of this date it has been two cycles since the discovery of the Higgs-boson particle by CERN scientists. Birth energy of Nelson Mandela.

4 Chuwen (Dec. 7th) – a “defining” day associated with play (and sometimes mischief); a “time- weaver” type of energy that can be quite eventful, as when Wikileaks released 2.4 million emails from Syrian government officials to different countries under this influence in 2012

7 Ix (Dec. 10th) – a “self generating transformation” type of energy that often works in conjunction with the energy of the previous day to really push change forward, as seen on the last appearance of this energy when seven Nishiyuu Walkers arrived in Ottawa after walking 1600 miles from Whapmagoostui, Que. (on Hudson’s Bay) through severe weather conditions (temperatures as low as – 50˚ C.) in support of the Idle No More movement. Joined by hundreds along the way, about 270 in total remained to arrive in Ottawa on this day, providing a huge boost to the movement. National memorial service to be held for Nelson Mandela.

8 Men (Dec. 11th) – a “resurrection” type of energy associated with the high vision of the Eagle; historically a turning-point type of day in terms of national leadership. Beginning of a three-day “lying in state” for Mandela at the Union Buildings in South Africa’s capital of Pretoria.

10 Kab’an (Dec. 13th) – a foundational type of energy associated with the earth and evolutionary movement; peak of the Geminids Meteor Shower (into the following morning – up to 60 meteors per hour predicted); final day of Mandela’s  “lying in state”

11 Etz’nab’ (Dec. 14th – Gregorian anniversary of the day on which Sakharov passed, in 1989) – an “inspirational flint” type of force that can be quite dazzling and attention getting, this time in conjunction with peak of the Geminids Meteor Shower and the intended lunar landing of China’s Chang’e-3 lunar probe, which was launched on Dec. 2nd. Named after the Chinese Goddess of the Moon the lander is due to descend on this day at a location called the Bay of Rainbows. Once settled it will release a robotic rover called Yutu (or Jade Rabbit – another name for Lamat), which will explore the surface for about three months. It was under this influence in the summer of 2012 that Venus achieved her greatest brilliance, in conjunction with an “extreme” X1.4 solar eruption.

12 Kawak (Dec. 15th) – the “gathering storm” (often associated with great compassion)  that provides the final big PUSH toward enlightenment; state funeral for Nelson Mandela, to be attended by a large number of world leaders (past and present)

13 Ajaw (Dec. 16th) – “transformational Full Sun”; Tun Shift as the Long Count calendar clicks over to Maya Date 13.0.1.0.0 on this final day of the 260 day cycle that began in early April of this year; 13 Ajaw is often a day of high drama and great change – and sometimes even great light, as when Pope Francis celebrated his first Easter Sunday Mass in a flower-bedecked St. Peter’s Square, dominated by sprays of yellow forsythia, daffodils, tulips, and white lilies on the last appearance of this energy.