Goggle-eyed and bearing a lightning axe – Chac is on the move! Don’t take your wellies off yet, as this is the Kawak (storm) trecena, an energy frame that has a tendency to be strongly catalytic and tempestuous, and often very, very wet! While this is not great news for those still knee-deep in snow, slush, and/or mud it does tend to be the nature of the beast. 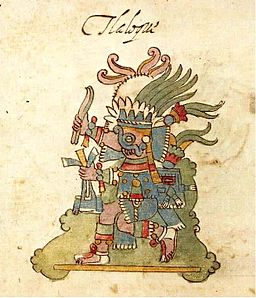 The rain deity Tlaloc, from the Codex Rios, via Wikimedia Commons

With both Tláloc, the Aztec god of rain (known as Chac to the Maya), and a powerful wind god acting as patrons, this is a period that holds the potential to bring in clouds, lightning, thunder, and heavy rainfall that can create either a “water blessing” that can purify and transform, or some sort of complete disaster.

Unfortunately it has been the latter that has unfolded in recent years – most notably during the summer of 2005 when Hurricane Katrina formed during the fifth day of this trecena, built up speed, and then hit the Mississippi delta on the 11th day (11 Muluk, associated with “change” in conjunction with “water”). That was the day when over 280,000 homes in and around New Orleans were either damaged or destroyed as a 25 ft. storm surge inundated the delta. Over 1800 people were killed, and some 23,000 acres were devastated, at a cost of some $81 billion (2005 U.S. dollars), making this the costliest natural disaster in U.S. history. 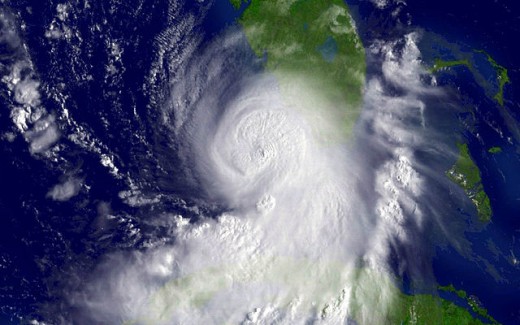 One cycle later, in May of 2006, another major system formed on the 6th day of this trecena and produced continuously heavy rain for several days in New England, triggering some of the worst flooding in that region in 70 years. By the 11th day (11 Muluk) a state of emergency had to be declared. Two years later, again on 11 Muluk, this time in July, the Osoyoos area of British Columbia was pummelled with golf-ball sized hailstones when a fierce lightning storm caused major destruction to fruit crops.

When this trecena arrived in May of 2011, all eyes were again on the Mississippi River as thousands of people were forced to evacuate from its flood plains as the crest waters made their way down the river to the Gulf. On 11 Muluk the following January, exactly three Mars cycles (9 Tzolk’in cycles) after Hurricane Katrina, “buckets of rain” and powerful winds spawned at least three tornadoes in Texas and brought major flooding to areas such as Dallas and Fort Worth (to the point where many cars were submerged). At the same time thousands were being evacuated in Australia as monsoonal rains sparked flash flooding and landslides in New South Wales and Queensland.

Last year it was Alberta that was hit particularly hard under this influence, when 27 communities were put under a state of emergency during this time frame. 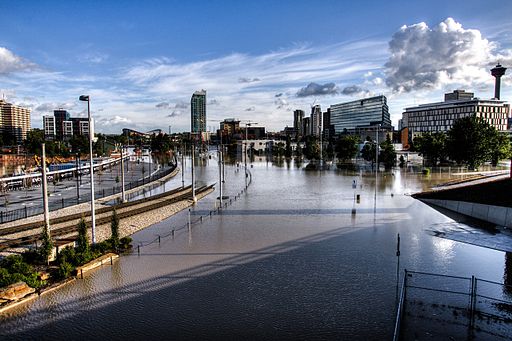 Canmore required many to be rescued from rooftops and tops of cars; High River was nearly completely submerged; and Calgary saw the Bow River running rampant through the city. Some 75,000 people had to be evacuated as cars were submerged and many key areas in the downtown core were inundated for several days. At the same time a cataclysmic flood disaster involving tens of thousands of people was also underway in India.

However, even though there is a strong possibility of storms during this frame it doesn’t necessarily mean they will be disastrous. Traditionally, Tláloc was associated with fertility, as the rain gods brought the life-giving water that was needed for the growth of crops. And there are some areas, such as California (once it gets past the mudslides) that will greatly benefit from these long awaited rains.

Often the emphasis is placed on the idea of compassion at this time, as Kawak brings the storm that can “sweep away” issues and problems and bring relief, as when the last full U.S. combat brigade made their departure from Iraq during this timeframe in August of 2010, and when (one cycle later) a CIA-led commando raid in Pakistan zeroed in on Osama bin Laden.

Currently, as we have been seeing on the news all during the past trecena, an exceedingly tense crisis has developed in Ukraine, with an interim government attempting to find its footing at the same time as thousands of Russian forces are infiltrating the Crimean peninsula and taking over military zones. We are now precisely paralleling the energies that were in place at the start of World War I, at the time when Austria-Hungary were preparing to declare war after Archduke Ferdinand was assassinated during the Kimi trecena in June of 1914. The world nervously awaits as what happens next could have implications that could affect the world as a whole.

2 Ajaw (March 6th) – a dynamic type of energy aligned with the full sun, full power, and the idea of “enlightenment”; the energy in place at the time of the “extraordinary” meeting of the European Union heads of state in Brussels to discuss de-escalation of the Ukraine crisis

4 Ik’ (March 8th) – the “defining” of wind/breath/spirit; an important energy associated with the connection between Quetzalcoatl and the sun; International Women’s Day – one cycle since the beginning of the Year of Reconciliation between Canadian Aboriginal communities and the rest of the society

5 Ak’b’al (March 9th) – the “pinpointing” of deep esoteric mysteries; in 2009 under this influence CERN’s Large Hadron Collider accelerated to the highest level ever achieved (up to that point) as part of a test to “unlock the secrets of the origins of the universe”. The beginning of Daylight Savings time.

6 K’an (March 10th) – a “six directions” type of energy aligned with “youthful vitality”, the energy that turned Katrina into a Tropical Storm in 2005 at the same time as it triggered an extreme solar geomagnetic storm.  On this day Edward Snowden (now in exile in Russia) will be speaking by satellite to the South by Southwest Conference in Austin, Texas. Also the opening day for the 58th session of the Commission on the Status of Women at the UN.

7 Chikchan (March 11th) – this “7 Serpent” (self-generating Liberation/Lifeforce) day is the daysign of Chicomecóatl, the Aztec Goddess of agriculture (especially maize) which is traditionally representative of the more positive aspects of this time frame, with its potential for providing conditions that are favorable for bringing forth nourishment; hopefully it will bring blessings to Japan as this falls on the 3rd anniversary of the tsunami

10 Lamat (March 14th) – “foundational bright star” – a foundational “signalling” type of energy (as seen in August of 2010 when the 33 miners trapped in the Chilean mining cave-in signalled that they were alive); Pi Day – an annual celebration in honour of the mathematical constant Pi.

11 Muluk (March 15th) – the “change” in conjunction with “water” energy described above with regard to many intense water related events, such as Hurricane Katrina; this time this day correlates with the 3rd Gregorian anniversary of the beginning of Syrian Uprising, by which time the death toll has risen to over 140,000 (including over 7,000 children)

12 Ok (March 16th) – a “grouping together” energy often associated with love, warmth, guidance, this time in conjunction with the Full Moon; the energy influence in place at the time of the marriage of John F. Kennedy and Jacqueline Bouvier. As this is the day when  Crimeans vote on whether Crimea wants to join the Russian Federation or stay with the Ukraine, the question will be: “Which one do you love more?”

13 Chuwen (March 17th) – “transformational monkey” or “transformational play” – a highly creative “time weaving” type of energy that is sometimes referred to as “Thirteen Threads”; a powerfully innovative type of energy traditionally aligned with play, creativity, and “time-weaving”; an energy that can sometimes “trick” one into thinking differently or trying out new possibilities, this time in conjunction with St. Patrick’s Day. The results of the Crimea vote will certainly determine the nature of this particular transformation.