Harvest festivals . . . Hallowe’en . . . Samhain . . . the Day of the Dead . . . the time of year when ghosts, goblins, Jack-o’-lanterns, and skeletons tend to come out to play. But after the horrific events in Ottawa three days before the start of this trecena, followed by  another unthinkable scene of horror at yet another high school in the U.S., none of that seems important. 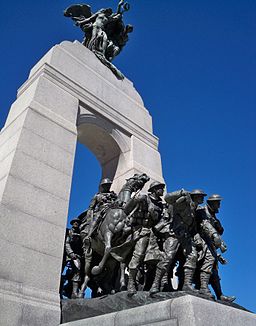 As we venture into this  B’en (“personal authority”) trecena, millions of people in Canada and the world over are wondering about the implications of the horrific and senseless assassination of a young soldier standing on guard at a war memorial in the heart of a nation’s seat of power. With terrorism running rampant in so many places many are questioning the whole notion of “authority”, and security, and many are wondering about their own safety and their own personal roles in the larger scheme of things. Such questions will continue to be asked when that young guard is laid to rest, with full military honours, near the beginning of this time frame. Such questions will also be asked when Patrice Vincent, the distinguished soldier who became Canada’s first casualty in the war against ISIS when he was ambushed near Montreal last week, is laid to rest.  And such questions will continue to be asked when the young victim of the Oct. 24th Marysville shooting is also laid to rest sometime during the next few days.

Within this present B’en trecena much emphasis will be placed on remembering the lives of those who have passed. In order to shed light on the nature of one of the important energies within this time frame this might be an opportune time to pay tribute to someone who was born within this trecena, and passed earlier this year. That was H.R. Giger, the innovative  sculptor, painter, and set designer who is best known for his Academy Award winning work in the film called “Alien”. Born on the tenth day of this trecena in 1940, Giger was doubly influenced by the force of “10”, as that number shows up twice in his 10 Ik’ 10 Muwan birth statement. And, as happens so very often, that influence can be seen quite clearly in his work, much of which has an otherworldly quality, a term that has been applied to the nature of his award-winning designs. In Maya mythology the number ten is represented by a deity known to the Aztec as as Mictlantecuhtli, the skeletal deity of the underworld, who is often accompanied by an owl (associated with Muwan).

By “coincidence” this 10 Ik’ 10 Muwan birth statement is very similar to the 10 Ik’ 10 Wo energy that was in place on the day in 1939 when King George VI came to Ottawa to formally unveil the National War Memorial, with the double 10 also being in place at that time. No doubt he would shudder to think that an innocent young soldier would be shot at that very place. 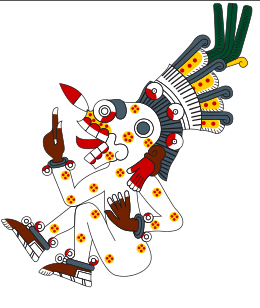 In conjunction with its role in shaping Giger’s life and work, this 10 Ik’ (“wind/breath/spirit”) component makes for a highly “otherworldly” type of birth effect – an influence which is vividly reflected in his surrealist art, much of which seems strangely skeletal in nature. This “10” aspect is strongly oriented towards “a return to Source, the genesis point for new life”. His “Birth Machine” sculpture in Gruyères, Switzerland is a perfect example of the manifestation of this type of energy. The sculpture even includes a large screw, reflective of the spiral that is often emblematic of death. Although Giger passed on to that other world in May of this year, his work is permanently housed in the Saint-Germain Castle in Gruyères. 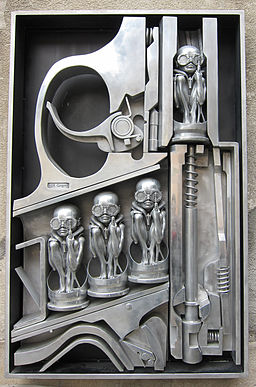 In addition to all that spirit-related energy Giger would also have been strongly affected by the forces associated with the B’en trecena itself, with its emphasis on self determination. This was what was in play last year at the opening of the Sochi Winter Olympics (said to be the most expensive Olympics ever, with athletes from 88 countries), on the day One B’en, which is an important shift-point within the Maya Calendar. And while that was taking place tens of thousands of pro-Western Ukrainians were rallying in Kiev’s Independence Square in a major push to oust President Viktor Yanukovych over his alliance with Russia. With Ben’s “strong personal authority” being so dominant at that time, in many arenas, it is easy to see the parallels with similar events at earlier times, including those times when B’en energy has been closely connected with other Olympics. The second day of this current trecena is also the day when Ukraine holds its elections, enabling the Ukrainian people to further indicate their political preferences in a perfect follow-up (energy-wise) to the events that took place the last time this trecena was in place. 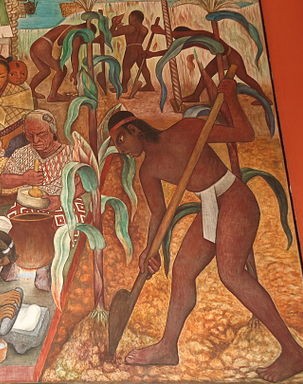 Detail from “The Maize” by Diego Rivera in the Palacio Nacional, Mexico City. Photo Credit: Kgv88 [CC-BY-SA-3.0], via Wikimedia Commons

Symbolic of robust growing corn and representative of strong self determination, the trecena begins with One B’en, an energy that has often been associated with huge shifts in the balance of power, as when Hernán Cortés and eleven Spanish galleons arrived on the east coast of Mexico in the early 16th century and kicked off the devastating events that so dramatically changed the whole of Mesoamerica. Several centuries later this same trecena brought forth the start of the Mexican revolution when the revolutionary Francisco Medero led strikes to denounce the dictator Porfirio Diaz.

In 2010 the first official Nelson Mandela International Day occurred on a One B’en day, on the day when he celebrated his 92nd birthday. Exactly one cycle after that, on One B’en in 2011, President Obama announced that he would be running for a second term as U.S. president, an intention that was sanctified precisely one cycle later when, on the day One B’en, delegates at the Democratic National Convention cast their votes for his continuance as President. This time the US midterm elections will take place during this trecena, so once again “B’en” will play a role in deciding the fate of that country, and the path it will take over the next couple of years. 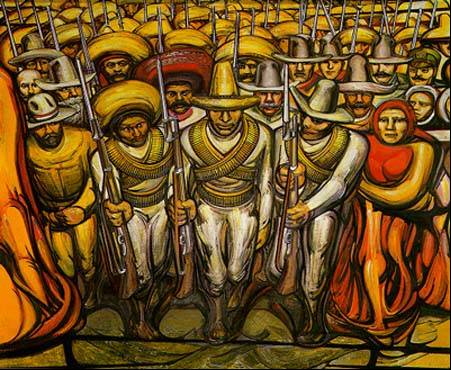 And as this trecena currently gets underway, we will see a major shift take place in the city of Toronto, as three contenders vie for the position of mayor, as the personal authority of one of them will enable that person to step into the position previously held by the “infamous” Rob Ford, whose “scandalous” antics have been the subject of  worldwide news on many occasions over the few years. This is the trecena that will reveal whether the Ford influence will continue, through the election of Rob’s brother Doug, or whether the change will be complete, through the election of someone not connected with that camp.

Overall, as noted before, this trecena seems to be an opportune time to “take stock” of one’s self , to examine one’s values, interests, desires, and goals, and to work towards their attainment. To assist in this endeavor these are the energies that will come into play:

1 B’en (Oct. 25th) – the “initiation” of “personal authority”, at the time of the Superior Conjunction of Venus, on the day when Mercury goes direct; a good day to make important personal decisions

2 Ix (Oct. 26th) – a dynamic type of energy aligned with “jaguar” earth mysteries and transformation; the time of the Samhain Festival in Meath, Ireland, and the Ukraine elections. This day also marks the 150th anniversary of the wrongful hangings of five Tsilhqot’in chiefs in 1864, for which the B.C. government has recently issued a formal apology.

3 Men (Oct. 27th) – the “activation of Higher Vision”; a Burner Day oriented around “announcing the fire” at the beginning of the “Eagle” burner sequence, an energy that sometimes heralds the nature of some forthcoming event or challenge; the day when Toronto holds its municiple elections (two cycles and one day after Rob Ford denied any wrongdoing)

4 Kib’ (Oct. 28th) – a “defining” day associated with the restoration of order; often a “getting down to business” type of force; the day of the full regimental funeral for Cpl. Nathan Cirillo, the young soldier who was shot at the National War Memorial (4 Tzolk’in cycles after the state funeral for Václav Havel, the president of the Czech Republic who led the 1989 Velvet Revolution in that country)

6 Etz’nab’ (Oct. 30th) – a “six directions” type of energy that can often be an attention-getting “flash- point”

7 Kawak (Oct. 31st) – “self-generating storm”, which can often bring a continuation of the weather pattern from the day before (if severe) or could manifest as a “storm of compassion”; this time in conjunction with Hallowe’en

8 Ajaw (Nov. 1st) – “resurrection” of the sun and “enlightenment”, on the day of the full military funeral for Patrice Vincent, the soldier who was ambushed near Montreal; also All Saints’ Day and Samhain, the Celtic New Year (and New Year’s Day for witches) 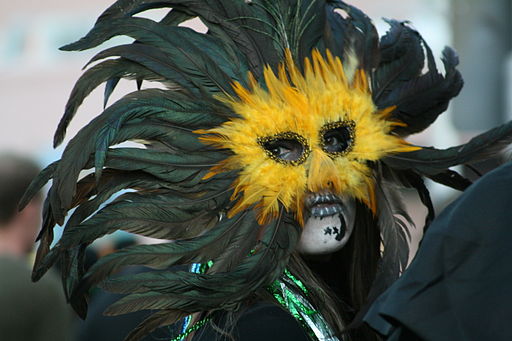 9 Imix (Nov. 2nd) – the “outward projection” of birth, the realm of all potential that can have long range implications, this time in conjunction with All Soul’s Day in many areas, and Dia de los Muertos, the Day of the Dead feast day in Mexico and in many Hispanic communities elsewhere, where altars are adorned with flowers (particularly marigolds) and special foods, pastries, and confections are put out to “honour” and “dance with” death as part of the cycle of life, and to remember those who have passed; ending of Daylight Savings Time 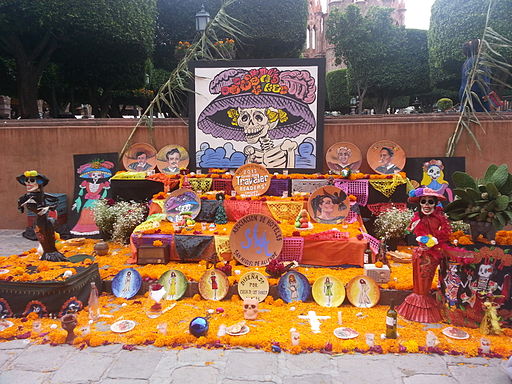 10 Ik’ (Nov. 3rd) – “foundational wind/breath/spirit” – an energy highly aligned with Source and with things pertaining to the air, to communication, and to things of a spiritual nature. Maya birth energy of the amazing H.R. Giger who passed over this past May. Maya energy return of the 10 Ik’ influence that was in place when Canada’s National War Memorial was unveiled in 1939.

11 Ak’b’al (Nov. 4th) – “inspirational night” or “inspirational temple of mysteries”; this is a day often aligned with deep thought – or even “blackness” (as when Brazil was plunged into darkness under this influence in 2010), but also a good day to enjoy the sanctuary of home or temple. Maya birth energy of U.S. Pres. Abraham Lincoln. At this time this 11 Ak’b’al force coincides with midterm elections in the US, seen by many as a crucial time for Democrats to hold their positions in order to maintain their ability to effect change.

12 K’an (Nov. 5th) – a “grouping together” type of energy often associated with youthful vitality and the joyful celebration of life’s bounties; this time at the time of the Taurids Meteor Shower and Guy Fawkes festivities in the UK

13 Chikchan (Nov. 6th) – “transformational lifeforce”; an intense energy that has brought forth strong weather systems and impassioned protest demonstrations in the past, this time in conjunction with the Full Moon and the second night of the Taurids Meteor Shower