Dancers, singers, song-writers, drummers, storytellers, artists, orators, feast makers, gift-givers, banner-bearers, flower-bedecked revelers,. . . . all these and many more would have been ready to fully engage in the festive time frame that began with One Ajaw, representative of the initiation of “Full Sun” or “Full Enlightenment”. 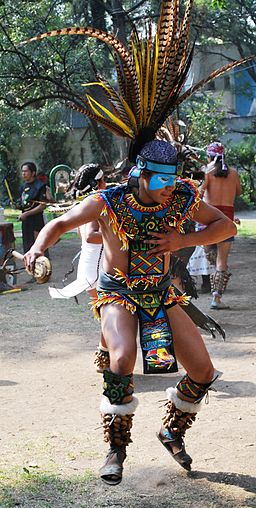 Known as One Flower to the Aztecs, the first day of this Ajaw trecena was celebrated traditionally as the “day of flowers”, and was seen as a joyful and highly auspicious time for “making merry” and extolling the virtues of creativity in all its diverse forms.

In Maya mythology this day has great significance as One Ajaw was the day in the Tzolk’in cycle when the “blowgunner” event occurred, when the Hero Twins shot the vainglorious Seven Macaw (false sun) out of the tree, clearing the way for the rebirth of Hun Hunahpu, First Father (aka Father Sun). With One Ajaw being representative of this rebirth of the sun it is also tied in with the idea of the rebirth of enlightenment.

There is also an important connection between Venus and One Ajaw as this is one of the important Tzolk’in dates associated with the completion of a Venus Round (a 37,960 day cycle), as when Venus rose as the Morning Star on the One Ajaw Sacred Day of Venus in the spring of 2001. Thus, this day was an important “marker” day to Classic era Maya timekeepers. In the past such events as the landing of Hernán Cortés at Veracruz in 1519 (the beginning of the Spanish conquest) occurred on One Ajaw, as did the defeat of Napoléon at the Battle of Waterloo in 1815.

On this particular Tzolk’in day in 2012 (two cycles ago) Venus as the Morning Star was in exactly the same position as it has been in the past at the time of two historic hurricanes. It was also within two degrees of the position it was in at the birth of First Father in 2360 B.C. On the occurrence of One Ajaw, in May of 2013, Venus was just beginning its rise as the Evening Star – at the same time as a 408 ft. spire was being installed atop One World Trade center, bringing it to a height of 1776 feet. And now, as One Ajaw returns once again (precisely 400 days since Dec. 21st, 2012) Venus is appearing again as the Morning Star, and will be sidling up to the crescent moon early during this trecena, en route to its greatest brilliance in early Feb. 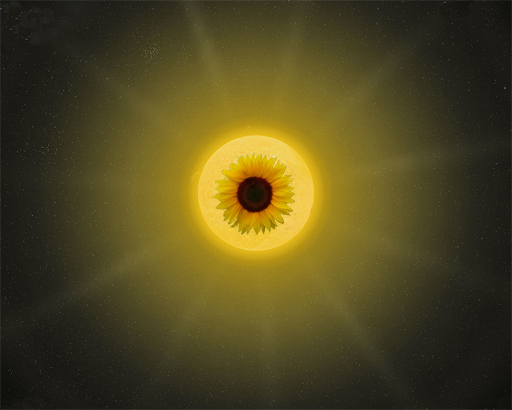 Sun with sunflower insert, both symbolic of Ajaw

The Ajaw trecena is often a time of high creativity, and may be particularly oriented in this direction during this present time, as the “seating” of the Maya month known as Pax comes in on the third day. As the Pax deity was kown as the “messenger of Itzamna”, a very high level creator deity, this suggests that this end of Jan. to early Feb. could be a very productive period indeed!

In the past some of the major events that have occurred during the Ajaw trecena include the adoption of the U.S. constitution in 1787; Abraham Lincoln’s delivery of the Gettysburg address in 1863; the discovery of gold in the Klondike, in 1896; the opening of Sun Records, that give birth to Rock ‘n’Roll, in 1950; the putting into operation of the first computer produced for commercial use, in 1951, and the stoppage of the BP oil spill in the Gulf of Mexico in 2010. 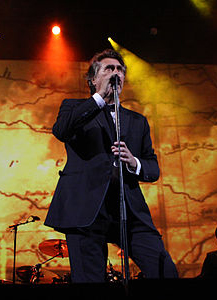 Bryan Ferry in concert. Bryan was born on a 3 Ik’ day – often aligned with music. Photo by Eva Rinaldi from Sydney, Australia (Uploaded by tm) [CC-BY-SA-2.0], via Wikimedia Commons

In 1961 it was the third day of this time period when President John F. Kennedy announced his goal to land a man on the moon and bring him home, before the end of the decade. The return of that energy last May marked the New Fire anniversary of that same 3 Ik’ 0 Sip combination that was in place on that day in 1961. As if to mark that occasion the sun put forth an X1.7 solar flare on that day.

This flare was strongly in line with the solar aspects of this trecena, which is, after all, oriented around Ajaw (the Sun). While this is often associated with the idea of warmth and good cheer, it has, at times brought intense heat, sometimes from massive solar storms. Indeed, the most severe/intense heat wave ever recorded in the U.S. and Canada (up to that time, 1936) manifested during the Ajaw trecena, with a similar situation happening in parts of the UK during this time frame in 1990.

This occurred again in 2009 when some of the highest temperaures ever recorded in Australia spawned some of the worst wildfires in that country’s history – and given the horrific wildfires that have been raging recently in Australia (and even in places such as California) this could be again problematic at this time. While the return of these influences does not necessarily mean that those situations will intensify, that possibility does exist. But hopefully the more benefic aspects of these solar blessings will prevail. Indeed, half way through the trecena this time ‘round Chinese New Year comes into play – with millions of people celebrating new beginnings with fireworks and the lighting of fires as they welcome in the Year of the Horse. 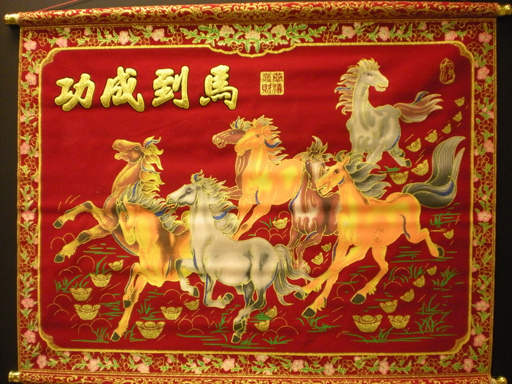 In addition to the “solar return” aspect of One Ajaw, the energy that begins (and oversees) this trecena, another day of particular importance in that regard will arrive on Eight Manik’ (Feb. 1st), which is the second day of Chinese New Year this year. In Maya tradition this was known as the Day of the Lord Deer, a “resurrection” type of energy aligned with sacrifice and reciprocity. While this could be seen as a “doubly harmonious” type of influence, representative of a doubling of solar energy, there is yet another strong “fire”/heat aspect to this. This ties in with the mythological link to the ancestral lineage of the Quiché Maya, as this day in the Tzolk’in was seen as the day when one of the ancestral forefathers left the people a “bundle of flames” as a reminder of his continuing presence. 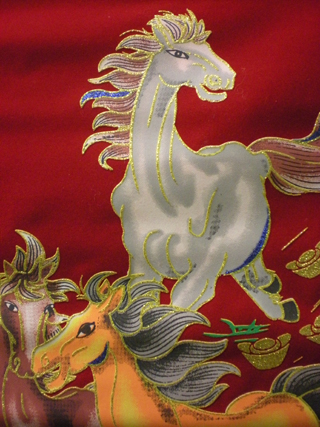 Chinese New Year 2014 – detail from Year of the Horse banner

Overall, this is a trecena that has brought forth many important shifts or changes in the past, often through the introduction of new ideas or through the taking of some form of positive action, perhaps triggered by all this extra input from the sun. With all the celebratory events going on during this period and with the extra creative energies in place from the new Maya month it should prove to be a very interesting time frame. As this current trecena unfolds, these are the energies that will come into being (days of particular importance are highlighted in red):

1 Ajaw (Jan. 25th) – the “initiation of Full Sun/Enlightenment”, an important Classical “marker” day; third anniversary of the start of the Egyptian Revolution in 2011

2 Imix (Jan. 26th) – a dynamic type of energy often aligned with “world-making”; a Tzolk’in anniversary of the day in 1954 when scientists announced their “Big Bang” theory

3 Ik’ (Jan. 27th) – the “activation of Wind/Breath/Spirit”, this time in conjunction with the “seating” of the Maya month known as Pax (as the “messenger of Itzamna”, the mythological lord of this month is associated with a very high level creator deity known to the Maya as Itzamna – see above). In honour of Bryan Ferry’s Maya birthday on this day click here to hear him sing Dance With Life (The Brilliant Light), which is so representative of this Ajaw time frame.

5 K’an (Jan. 29th) – a “blessing” type of energy associated with youthful vitality and prosperity, but can also involve “recklessness”

6 Chikchan (Jan. 30th) – a “six directions” type of energy associated with Lifeforce and Higher Knowledge, this time in conjunction with the New Moon; Tzolk’in anniversary of the day in 2011 when scientists at the CERN lab in Switzerland announced that they caught their first glimpse of the Higgs boson “God” particle that is thought to underpin the subatomic workings of nature

7 Kimi (Jan. 31st) – “self-generating death” or “self-generating foundations” – a “return to Source” type of force that can draw attention to “absolute foundations”, this time in conjunction with Chinese New Year and, in British Columbia, Nisga’a New Year (click here for information about Hobiyee celebrations and dances)

8 Manik’ (Feb. 1st) – Day of the Lord Deer in Maya tradition, a “resurrection” type of energy aligned with reciprocity; this time in conjunction with the “Birthday of the Dog” in Chinese New Year celebrations, the day when dogs are given special treats; second day of Hobiyee (click here for an explanation of the meaning of Hobiyee)

9 Lamat (Feb. 2nd) – the “outward projection” of leadership, in alignment with Venus – perhaps heralding the forthcoming Olympics?; Groundhog Day – when a groundhog will tell us whether to expect 6 more weeks of winter or (if he doesn’t see his shadow) that spring will soon arrive; SuperBowl Sunday in the U.S.

10 Muluk (Feb. 3rd) – “foundational water”, often a powerful “shape-shifting” force; the auspicious fourth day of Chinese New Year, known as “Yang Ri”, the day when “rubbish” (and anything associated with bad luck) is thrown out and the Kitchen God (associated with good fortune) is welcomed in

11 Ok (Feb. 4th) – “inspirational love (or guidance)” – a Burner Day representative of heart, love, fire, and passion; the fifth day in the Chinese New Year sequence, known as the birthday of the God of Wealth – a time to welcome wealth into one’s home

12 Chuwen (Feb. 5th) – “dedicated” play; a “timeweaver” type of energy than can have a kind of “anything is possible” aspect to it; this time in conjunction with the sixth day of Chinese New Year, known as “Ma Ri” (the day of the horse), the point during these celebrations when the god of poverty is sent away (usually by throwing out anything that looks ragged or poor); opening of the huge Northwest Flower and Garden Show in Seattle

13 Eb’ (Feb. 6th) – “transformational vitality”; a powerful stream-of-consciousness type of energy reflective of the sun’s intense vitality, a vitality that can sometimes “let loose” at this time; this accompanies “Ren Ri” (the day of human) on the seventh day in Chinese New Year, representing the creation of human beings – a good time to eat noodles, which are symbolic of longevity; also a Gregorian anniversary of the day in 1952 when Princess Elizabeth acceded to the throne as Queen after the death of King George VI