As so often happens on 9 Chikchan, this was a momentous day on many fronts. After several tense days dominated by the threat of a U.S. military strike in the Middle East, high level political maneuvering has managed to tone this threat down a notch as negotiations continue.

Within the context of this timeframe, however, a number of striking energy parallels can be seen, particularly on the days 6 Ik’ (associated with communication) and again yesterday, on 9 Chikchan.

The 6 Ik’ energy that was in place on Monday was an energy return of that which was in place in mid September of 2008, when “the worst financial crisis since the Great Depression” was caused by the collapse of two of the five major investment companies in the U.S., which triggered a dramatic plunge in the stock market. Three years later, on 6 Ik’ in July of 2011, negotiations between President Obama and Republican Congressional leaders with regard  to the U.S. national debt issue broke down, putting that country on the brink of another major economic crisis.  On that same day hundreds of thousands of people across Syria took part in massive protest demonstrations against President al-Assad. That particular demonstration, aimed at fostering national unity against oppression, was called the day of “The Descendants of Khaled”, a 7th century disciple of the prophet Muhammad who united the Arab Peninsula.  In the two years since then tens of thousands of people have been killed in that country, with the use of chemical weapons being responsible for the deaths of many.

And so, with the arrival of 6 Ik’ this September, President Obama again had his work cut out for him, with the implications of this work being highly consequential for his own country, for Syria, and for many other countries.  On that day a shift in communications finally brought forth the admission  (for the first time) that Syria, indeed, does have a chemical weapons arsenal – a situation that has now become the focus for the intense international talks that are now underway.

As this trecena would have it, Thursday’s 9 Chikchan brought forth the return of precisely the same energy that was in place in April of 1997 when the Chemical Weapons Convention entered into force.  Significantly, this treaty, which has been signed and ratified by all but seven nations (Syria included), came into being during this trecena in 1993.  Then, yesterday, in tandem with the discussions taking place concerning the proposal that Syria hand over control of its chemical weapons, Syria finally added its signature.

So on this energy anniversary of that which was in place when the Battle of Gettysburg raged in 1863, when Germany invaded Poland in 1939,  and when the Allies liberated Paris in 1944, we again have had a number of pivotal events that hold long-range implications for the future. Although the trecena is still not over, it has been living up to its reputation of being highly consequential on many levels. 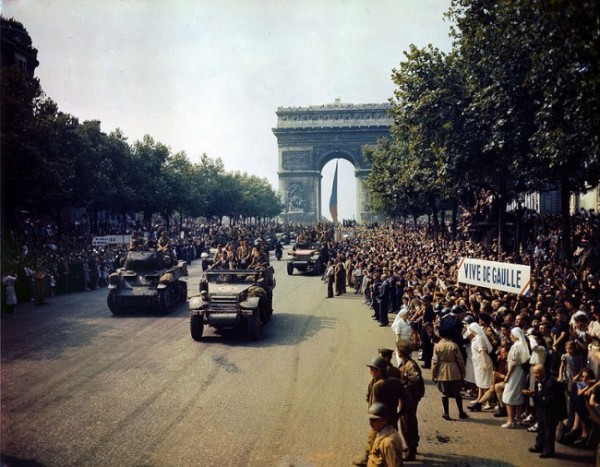 Crowds of people line the Champs Elysees as Allies parade through the Arc de Triomphe the day after Paris was liberated on 9 Chikchan in 1944.
Source: Library of Congress Prints and Photographs Division Washington, D.C. 20540 USA (digital file from original transparency) fsac 1a55001 http://hdl.loc.gov/loc.pnp/fsac.1a55001